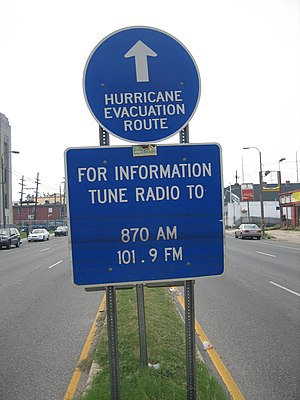 It was approved with 10 votes for and 2 abstentions.

Tagging seems adequate in places where evacuation routes are available. Contra-flow (reverse lane) routes should not be mapped as they can cause confusion and may not always be available. On-the-ground routing will be available when contra-flow routing is available.

Deprecate the key:evacuation_route tag and start fresh with an evacuation route which includes the type of emergency, the direction of the route, and any contact information that may be associated with the route.

The current key:evacuation_route tag is quite deficient in information and is only sparsely used (4424 times as of 2018-08-05). In an emergency or disaster situation, it is important for people to have this information at their fingertips quickly to be able to get out of harms way.

In the United States, many (all?) coastal states along the Atlantic Ocean and Gulf of Mexico have hurricane evacuation routes to aid people's evacuation away from their homes and vacation spots. Many (all?) localities around nuclear power plants and other hazardous materials-handling facilities also require evacuation planning including pre-defined routes. These routes are typically signed with a round, blue evacuation route sign.

In countries bordering the Pacific Ocean, many (all?) have tsunami evacuation routes that route people to higher ground.

This tagging would apply to highway ways.

Some areas reverse lanes of highways to speed the evacuation of higher population areas. These reverse lanes should notbe tagged as an evacuation route as a routing engine may attempt to route someone onto a highway that hasn't been reversed as of yet.

It would be nice to have some sort of an emergency feature on the client side that would highlight emergency routes, along with placing emergency POIs, on the map. The ability for a client to immediately route to an evacuation route and then follow the evacuation route from their current location should be the goal.

This would deprecate the key:evacuation_route page. This would also change the relation:route page and an entry on the Emergency Project page should be made.

This proposal also adds tags around the key:information (example information:eas = 870kHz) tag. By adding the radio broadcast frequencies to the evacuation route (in the United States these are known as Emergency Alert System or EAS), people know where to tune their radios to obtain further information.

I think that one could easily use the direction tag to show which direction the route goes. The problem I foresee is a routing engine trying to route someone along a highway backwards before the highway has officially been changed to reverse routing. I would just mark the main route and maybe mark in the description that the opposing lanes could be turned around and used as well. I wish you had brought this up in the discussion we have been having on the topic on the mailing list or started a discussion on the discussion page. --Sparks (talk) 14:52, 11 August 2018 (UTC)