Modern gps navigation devices are able to guide the driver to select the appropriate lane to follow. In more advanced devices a detailed '3D' street layout with individual lanes can be displayed. In order to implement such functions the necessary data must be available. The present tagging scheme allows for an easy way of mapping such data.

Despite various attempts to create a lane tagging scheme none have so far succeeded in gaining any support.

This proposal addresses a number of problems of those previous attempts.

Example showing the use before discussing the dry stuff:

This describes a 4 lane highway having a left-turn lane, two straight-through lanes and a right-turn lane.

The tag value is an ordered list of comma separated lane values starting with the left-most lane and ending with the right-most lane. Each lane must be listed exactly once even if there are multiple lanes of the same type.

The lane value has the general format: (flow-dir)(type:)dir. Fields in brackets are optional.

flow-dir: Flow-direction prefix, used for lanes where the traffic flow is not in the forward direction. Possible values for flow direction are:

type: Usage field describing who may use the lane. This field is optional. Possible values for 'type' are:

The use of cycle_lane, cycle_track and sidewalk values is optional if the highway is already tagged with corresponding cycleway:* or sidewalk:* tags. But the cycle_lane value should be used when cycle lanes are located between other lanes.

dir: Connection field describing where the lane leads to. This field is mandatory. Possible values for 'dir' are:

The turn directions may be combined with the plus ('+') character, e.g. a lane for straight-through and right-turn traffic may be coded as 's+r'. Multiple directions should be ordered from the left-most direction to the right-most direction.

Please note that 'left' and 'right' are relative to the traffic flow direction, not to the direction in which the way has been drawn.

Further properties such as lane specific maxspeed or maxwidth restrictions can be accomodated by additional tags like this:

This defines that the two right-most lanes have a 70 km/h speed limit while a default speed limit if any applies to the two left-most lanes (indicated by the "*" character). The number of lane values including the empty ones must match that of the lane_group tag.

Most established tags usable together with highway=* can be applied to individual lanes in a similar fashion.

Examples are restrictions, surface, name (?) and ref tags. Notable exceptions are lanes and oneway tags as they would conflict with the lane_group tagging.

In rare cases the comma character is used within tag values, e.g. in opening_hours=*. To prevent conflicts with the separator comma such values should be put within round brackets "(" and ")" if they comprise commas.

Software must determine which lane(s) a driver should select in order to follow the planned route ("lane assist" function). It must detect all ways forming legal turn opportunities departing from the joining node (but ignoring any oneway ways leading to this node). When there are any straight-through lanes there must be exactly one corresponding way for the through direction when all turns have been accounted for.

For advanced "3D" display ("junction view" in Garmin terminology) the lanes of successive highway segments must "line up" correctly to render a seemless layout of the lanes. The following assumptions can be made for the continuing 'through' way.

This tag describes what happens to a lane ahead at the end node, i.e. how it connects to lanes in the straight-through highway ahead (if any).

Match values may be combined, e.g. if two right-turn lanes are created this may be indicated as +r+r.

Example 2 (cycle lane between other lanes) 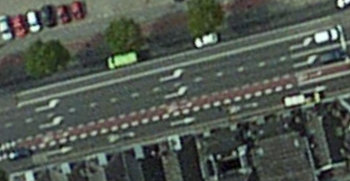 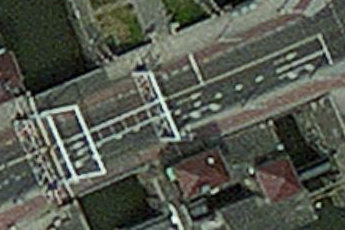 Case with two directions, tram rails (not easy to see) and cycle lane. The rigth turn lane leads to two different right-turns (double right arrow). The way is assumed drawn from left to right. The cycle track below the right-turn lane is assumed mapped as a separate way.

Two through lanes (way segment 1) continues as right turn lanes in way segment 2. A new through lane is created left (because it leads to a minor road ahead). 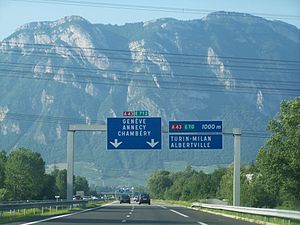 Example showing the use of ref=* and destination=* on lanes (image from this proposal).

This proposal does not deprecate any existing tags. In case of conflicting tags the lane_group tag should take precedence. In particular, the existing lanes=* tag may be used when there are only normal through lanes, e.g. lanes=2 corresponds to lane_group=n,n (which may then be omitted).

Editors like JOSM should be aware of this tag in order to warn users if they try to reverse the direction of a highway.

Voting has been cancelled, the proposal has been returned to RFC status for possible amendment. The votes already cast have been moved to archive.