There is no single approved standard in OSM to mark turn lanes of roads. But navigation software these days have means to display and route lane-wise. So, it is time to establish a tagging scheme.

The proposal consists of the following parts:

Do not be frightened by the size of this proposal page: most of it are examples, and all descriptions of proposed features fit in one screen. Check frequently asked questions to better understand some points.

Tagging as defined in this section is mandatory. Two other tagging schemes are used to aid processing software and human readers in complex cases.

This is already being used (except lanes:reversible), just to state it here for completeness.

It is not necessary to state both lanes:forward and lanes:backward: one can be determined from the other and lanes, for example:

Lanes number for directions may be omitted completely in following cases:

If a two-way road has more than two lanes, regardless of evenness of number, lanes number for directions is ambiguous and should be stated in lanes:*.

Each lane on the road leads to another way after a crossing. On a crossing ways are divided into groups: straight, left and right (and, sometimes, back). This is drawn in reality with road signs and road markings. Lanes are divided into groups: those from which you can drive through, or from which must turn. Turn lanes for left turn are always located on the left side of a road, and right turn is possible only from the rightmost lanes. Is is not so clear for U-turn lanes: in most countries they are at the left, but in UK — at the right side of a road.

Anyway, the task is to determine the number of lanes for each direction, including 'through'. The tags are, therefore, obvious:

The explicit value of lanes:through must be stated when there are more then two types of turn lanes, or some turn lanes allow going straight.

This is not relevant to the above mentioned tags, but lanes are numbered from outside to inside. That is, the first lane is the rightmost one for right-hand traffic and leftmost one otherwise.

Every lane type has default position:

If a group of lanes is not in default position, see #Lane Positions.

First of all, the answer to the question «How do I map lanes where rightmost lane is for both going through and turning right?» is, you don't. 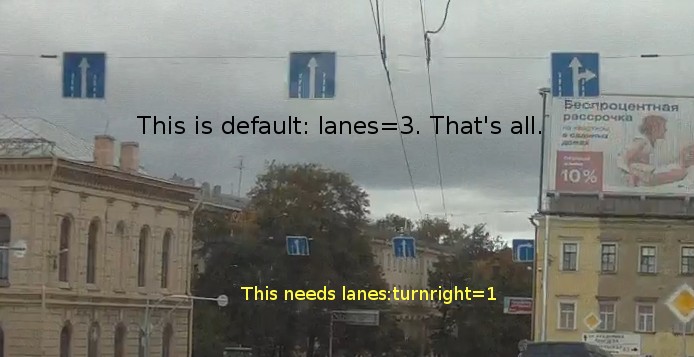 By default, lanes that are closest to sides of the road (one lane each) can be used both for going through and turning — if there is a turn. If lanes:turn* is specified, then the lanes mentioned can be used only for turning.

What if you cannot turn left or right at the next intersection? Use turn restrictions then.

(Assuming a way is drawn from left to right)

turnleft:backward is actually not needed, since there must be a turn restriction restricting drivers from going right or forward. 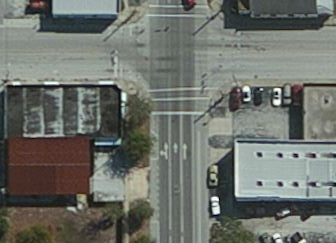 Again, lanes=3 should be enough: this distribution of lanes can be considered default. There must be a turn restriction forbidding right turn and making the rightmost lane a through one. So, in most cases a turn restriction defines a set of lanes for a part of the road that does not need additional tagging (see below for directions building algorithm).

NE2 made a pretty picture of a road with a lot of turn lanes. Let's try to apply this tagging scheme, considering that the road is drawn with a single way broken at red lines, direction of each segment is from top to bottom:

Not so hard, actually. The defaults that were in use in this example:

If there were a lane that's both turnleft and straight, we'd have to specify lanes:through.

As one can see, the exact distribution of lanes cannot be constructed from just those tags (in this case, though, it can -- if :though and :turnright are omitted). That's why the next section is introduced.

In non-standard lane arrangements, for example, when bus lane is the leftmost one, lanes:bus is not enough, because by default bus lanes are on the right (for right-hand traffic). Also, if some lanes allow both turning and going straight (and through lanes are not arranged evenly), lane arrangement is ambiguous. For those cases, locations of some lanes should be stated.

lanes:X:location=* is the number of the first lane in lane group X, or a special keyword for denoting where the lane is: left, right or sides (two equal groups both on inside and outside of a road). For the example above, the additional tag will be lanes:through:location=right (or 1 for right-hand traffic, or 2 for left-hand traffic).

Considering this notation, the default values for special and turn lanes are as follows:

As with other lane tags, if there are two directions for one way, lanes:X:location:forward/backward=* may be used — but it is strongly recommended to divide such ways in two directions to simplify tagging. 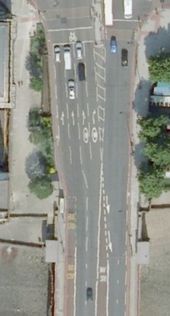 This is a British road, left-hand traffic. Assuming ways are directed from bottom to top.

The rightmost lane is used for turning right, but it is also a bus lane (where PSVs can go straight).

Actually, this one is unambiguous without :location, but is a nice example of tagging by the photo.

For a convenient presentation, lanes:* tags should be converted into a number of directions for each lane, like on road signs:

For simplicity, we will use the following characters separated by commas, from left to right:

For example, the sign above can be written as l,l,sl. Note that lane numbers start from left for a left-hand traffic and from right for a right-hand traffic. Outer side is lanes 1,2,etc; inner side is N,N-1,etc (where N is a value of lanes tag). If *:location=L, the group of lanes fills lanes L,L+1,etc.

The description is for a right-hand traffic:

The resulting calculated value is l,sl,s,m.

For left-hand traffic the result would be ml,ls,s,s — but it's highly unlikely to have both merge and left turn lanes in the same segment.

For a left-hand drive, the result would be m,p,s,s,mr.

Connecting lanes with ways they lead to is possible only with relations. Also, sometimes it is hard or not possible to determine, which connected way is 'through' direction. For those cases, the relation is introduced. It is extended restriction relation, so all auxiliary tags are the same.

Members are also the same as in restriction relation. The idea is that lane restrictions do not differ from regular restrictions (are marked with the same arrows), but are different for each lane. It's imperative to use restriction=only_straight_on for through-only lanes. 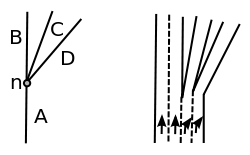 How to state which turnlane leads to which ramp? Only with relations. 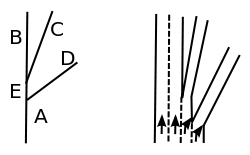 If the ramps are separated (and the distance is big enough), the relation is not needed: everything would be obvious from the tags:

When the distance is too small, it can be done with above mentioned relations, but the first relation's 'via' member would be Way E. 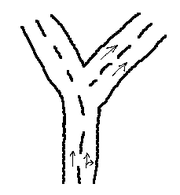 If all those road segments are have equal highway values, no names or refs, it is nearly impossible to determine, which direction is the "through" one. Of course, in this case right turn might give it up, but consider a left turn in a 100 meters further, so there would be both left and right turn lanes.

To tell the router which way is through, there must be a relation that gives roles to those ways. In this case, it would be restriction=only_straight_on, lane=2 (for right-hand traffic) and with forward-left way as a 'to' member. In the imaginary more complex case, the small segment between intersections would be the 'to' member of that relation, while leftmost lane could still be considered turn lane on both segments.

Please leave your comments and questions on the Talk Page.

Voting has ended. 18 users approved, 21 opposed, 2 were undecided. The proposal was deemed too complex and needs improving and simplifying.