From OpenStreetMap Wiki
< User:Ömmes
Jump to navigation Jump to search
User:Ömmes/Wayparts - Other languages

Wayparts should make it possible to define a way not only by its position, function etc. but by seperating it into different parts. These parts will be lanes for "normal" traffic, cycleways, footways, parking lanes and so on. It is possible to add as many parts to a way as needed. Each waypart can contain tags to describe it in particular, i. e. access, function, width, divider and so on.

To be flexible with the definition of wayparts, the parts are created as relations. A relation can be of the type "waypart" for a single part of a way or "wayparts" to define one or more parts in a grouped relation.

Each relation contains at least one member: the way it belongs to. Additional members can be a start node and an end node. With these nodes it is possible to "split" a single way in different waypart "sections" without having to split the way in real (e. g. a single way starts with 2 wayparts, from the middle till the end it has 3 parts). Also more then tow or more contiguous ways can be member of the same waypart(s) by adding them as members and selecting the start node from the first and the end node from the last way of the sequence. Therfore the waypart is not depended to the direction of a way if start and end nodes are set.

Each part of a way - a waypart - gets its number to indicate the ordering. Positive numbers define forward parts (usually on the right side of the road), negative numbers mean backward parts.

A relation of the type wayparts is meant to define the "default" parts of a way, i. e. the parts which follow the way for a longer distance. A single waypart might be used to add an extra part to the way.

Example: A motorway with 2 lanes and some exits/exit lanes. The 2 main lanes go into a wayparts relation, each of the exit lanes will be added as a waypart (using a start and end node).

wayparts relation (one or more parts)

A wayparts relation adds one or more parts to a way. The simplest use is setting a value for parts.

Individual parts can be tagged as partX and part-X where X is the part number. Additional tags can be set as partX:key and part-X:key. 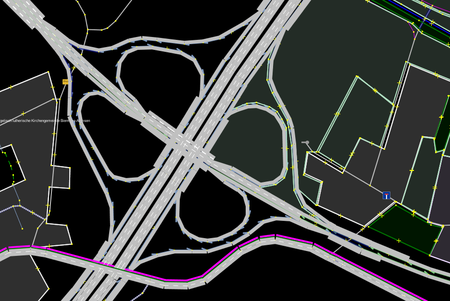 The JOSM plugin for Wayparts is in an early state, but you can try it:

Copy the file to your JOSM plugin directory: see http://wiki.openstreetmap.org/wiki/JOSM/Plugins#Manually

Use the JOSM latest version. As the current version is somehow broken, use this one: http://josm.openstreetmap.de/download/josm-snapshot-2447.jar

The plugin adds a layer which displays the Wayparts of the active edit layer. You can remove the Wayparts layer but actually not add it again unless you load data into a new edit layer.