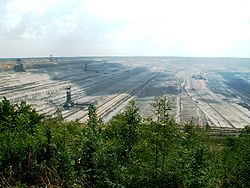 lignite surface mine near Hambach, Germany

This page is about a 2007 non active proposal. A newer tagging scheme is now at industrial=mine, that goes combined with landuse=industrial.

In my region there are some very large surface mines (up to 4000 hectares of area) which I would like to tag. See wikipedia:de:Tagebau and wikipedia:surface mining for details on such mines.

There currently is landuse=quarry which is specific to a specific version of a surface mine for stones. I think this is not adequate to use on other types of mines. A quarry could even be defined one type of a mine as described below.

Additional Tags to be used with mining

On the _edited_ Proposal

On The _first_ Proposal

I think there should be an additional tag to identify them as surface-mines (perhaps under-surface-mines will come into OSM sometime too). Would it be a good idea to consider all landuse=mining with a layer < 0 as under-surface and layer=0 for surface-mining? --Dennis de 15:36, 13 September 2007 (BST)

What is the difference between a surface mine and a quarry which already has a defined feature? User:chillly 16:25 20 October 2007 (BST)

According to wikipedia:Quarry it's a specific surface mine for stones. Our surface mines extract lignite (brown coal). So a quarry is a surface mine, but not every surface mine is a quarry. --Dennis de 16:56, 24 October 2007 (BST)

Also how are you planning on differentiating this from deep mining? ShakespeareFan00 11:37, 23 October 2007 (BST)

Shakepeare means the difference between a mine with a shaft which goes underground and is tunnelled, or one which is a big pit. a big pit mine is usually called an opencast mine. it is a valid question, one i was intending to ask. they appear very different on the surface, despite being used for similar substances. Myfanwy 18:14, 14 November 2007 (UTC)

I'm sorry, I missed your comment. In the updated proposal there's an additional surface-tag, which can be used to differentiate them. Thinking about it, the best way to model shafts are of course ways. So would it be OK to have this tag apply to ways in combination with ways to fit your needs? Other ideas are welcome. --Dennis de 09:51, 29 November 2007 (UTC)

this proposal has closed, it has been rejected