The tag healthcare:equipment=* is used to indicate what type of speciality medical equipment is available at a health facility.

The tag healthcare:equipment=* is in use, but has not been formally proposed until now. The ability to be able to record what speciality medical equipment is available for use at health facilities is very important for understanding whether or not certain types of treatment can be provided at that particular site. This information is important for deciding where a patient will be sent based on their needs and whether or not a health facility has the proper equipment to support those needs. The use of ‘health_amenity:type’, was initially proposed by Fabi2 as part of Healthcare 2.0. The Healthcare 2.0 wiki page put together by OSM user Fabi2 is very extensive and informative, but unfortunately the whole page has been listed as abandoned, so it was reviewed and tags were re-purposed where it made sense.

TagInfo, the Wiki and Tag History were also utilised to try and find tags that might already be in use. And although there were some, non of these were ever formally proposed or accepted by the community. Originally the health_amenity:type=* tag was proposed based on the use count of 37 derived from TagInfo and the gradual increase in its usage over time as found on Tag History, with both the information and the snap shots below taken on June 14. It looks as though use of the tag started in early 2011 and went quiet in 2013, before having a resurgence in 2015 from which it has continued to be applied for the purpose of capturing the type of speciality medical equipment at a health facility. However based on discussions with the OSM community, it seems as though it is limited to identifying first aid kits and weighing scales, but most importantly that the tag is confusing as to what it information it is trying to capture.

So in retrospect it is better to move away from previous tagging efforts and propose a new tag altogether that is straight forward and easy to understand (says what it is). The main aim for the proposed tag is to encapsulate that it's related to health equipment, so we decided on healthcare:equipment=*. 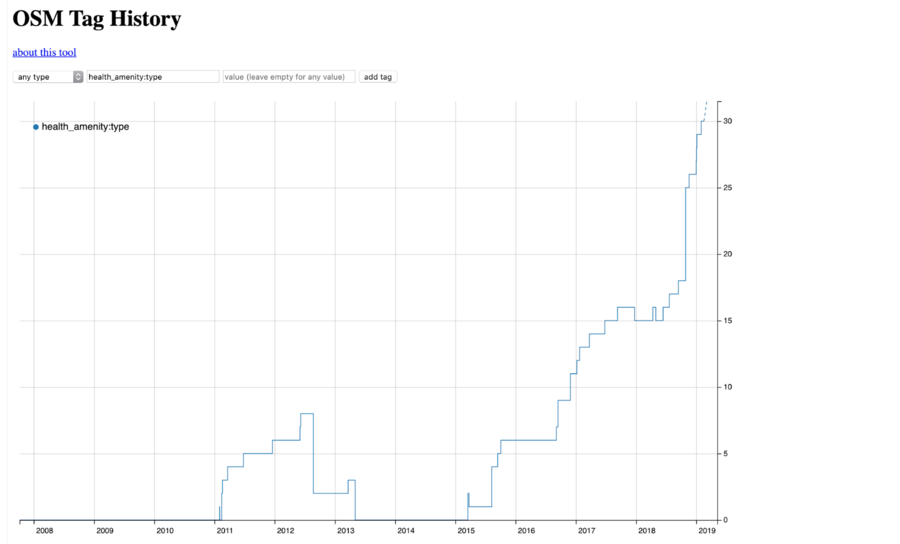 Instructions for voting
Note: The ~~~~ automatically inserts your name and the current date.
For full template documentation see Template:Vote. See also how vote outcome is processed.
Retrieved from "https://wiki.openstreetmap.org/w/index.php?title=Proposed_features/Tag:healthcare:equipment&oldid=1889713"
Categories: