For asymmetric areas or point features, this gives the compass direction of the asymmetry or which direction the node object points towards. The direction could be measured by a compass or determined visually. North on the map means top side, the direction of increasing latitude, or y coordinate in google projection.

For areas, examples are the direction of planting in a vineyard or planted forests only runnable in one direction.

What is a direction

Imagine a point right in the geometric center of a feature: inside a metal pole for a road sign, at the center of a bench or a painting, inside the entrance to a cave or a telephone booth. Now determine a point where an observer should stand to see the most important side of the point feature: a sign contents, an entrance or a door, a painting, a face of a man sitting on a bench. The angle between the direction to the Grid North and the direction to that point where the observer should be located is the needed value for the direction tag. 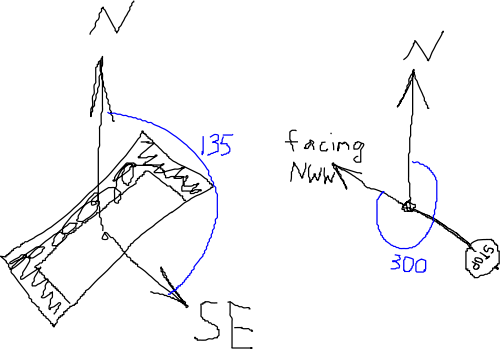 For areas with flow or implicit single direction it is that direction. For example, for river bodies the direction is that of the water flow.

If the area has a anisotropic structure (for example, a farmland), the direction is along the visible lines. Any of two or more directions can be chosen. 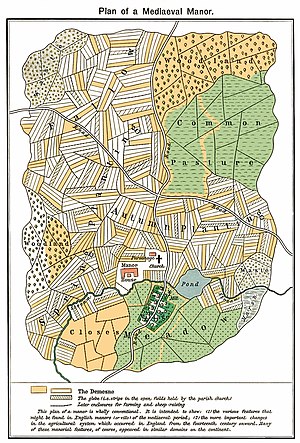 Here are a lot of anisotropic fields with different directions

When the lines in the area resemble an orthogonal or hexagonal (or any other) grid, the angle for direction can be chosen along any of 4, 6 or more ways, if the priority direction cannot be established.

There are three ways to tag a direction. 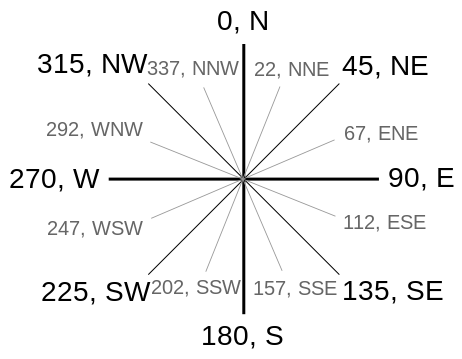 An upper-case latin characters of [NWSE] meaning one of the cardinal directions.

A simple cardinal direction can also be stated as a single English word in lower case: direction=north/east/south/west. It should be treated the same as the usual cardinal direction, looking only at the first letter of the word. No complex directions (north-east and such) are allowed in this form.

A number, preferably integer, between 0 and 360, which means a number of degrees from the North clockwise.

The direction tag is already used for other features.

Please use the Talk page for discussion.