A relation that groups a point feature (e.g. a road sign or a 3d painting) with a node or a way, to which this feature is facing (e.g. a highway segment or an observation point). This is a generic proposal, it does not address the tagging of specific types of objects (e.g. stop signs). For stating the direction of unrelated point features, Proposed features/direction should be used. 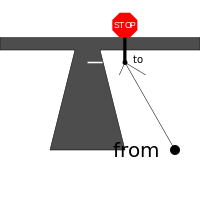 The only required tag on relation is type=direction.

The relation must have two, and only two members: the directional node and the related node/way.

Here 'from' member is a way, leading to a highway=stop (which is placed not as recommended on the wiki page, just for example). Since the node is in the direction relation, it affects only vehicles coming from the specified direction.

A 3D painting is best viewed from a single point, usually marked. So in a way, a painting has a direction.

A traffic mirror is viewed from 2 directions. It is represented by a node. highway=traffic_mirror

Please use the Talk page.

erg.. yes it's not a physical thing and yes the relation describes a line to detrmine the direction.