Currently there are well-defined rules in Open Street Map for labelling beacons for sea and air transport. Inside a building, the problem to solve is very similar having the same objective: to position and guide a user through the venue. This proposal has an analogue scheme to the mentioned existing tags for sea and air navigation but in this case the idea is to label several types of indoor beacons.

Indoor location and navigation are fields of investigation that require a geographical information system to store information. Not only the layout of a building and navigation graphs, also the location of indoor beacons are important for such solutions.

The Ubica2 project developed by Zed with the collaboration of URJC is creating an indoor navigation system based on several indoor positioning technologies. Some of these technologies require the use of beacons such us:

But all these items have to be deployed in a building and therefore, their information has to be stored in a geographical data base. Having this, navigation applications could query the information required to locate and guide the user. This proposal tries to find the best way to store all the data belonging to beacons in Open Street Maps

It is proposed to label the markers in a similar way as is established for seamark and airmark tags. To this end, the label indoormark is defined and assigned the value of beacon. Furthermore, we can extend a beacon with a number of attributes that allow accommodate all the information necessary.

The scheme devised as follows:

The only mandatory tag is the indoormark key but it is suggested to add some more information using the other tags shown in the previous table. In addition, the use of the level tag provides compatibility with the specifications written in the Simple Indoor Tagging wiki page. Doing all that, navigation systems could retrieve all the data they need to position the user. For instance, an ibeacon based application should know the major and minor numbers to distinguish any ibeacon. A NFC tag would give its unique address when detected and this value could be use to match an indoormark in Open Street Maps and obtain its coordinates. See the examples below to know how this can be achieved.


QR codes can be used to give a unique identifier when scanned. An approach to transform that to a position within a building is to match the unique identifier given by the QR with the item tagged in our OSM map. Doing this, we can get the coordinates and also the level where the QR is placed.


NFC can be used in a similar way to QR codes. In this case, the address of the NFC is unique and the procedure to obtain the location could use its value to get the coordinates and level from the map.


In the case of an ibeacon, we will need more data in order to make work our triangulation algorithm. Useful information to store is the uuid of the beacon, its major and minor numbers and the signal calibration value (measured)

Rendering could be done using icons preferably. In our project we are using a map style for JOSM in order to differentiate all types of beacons 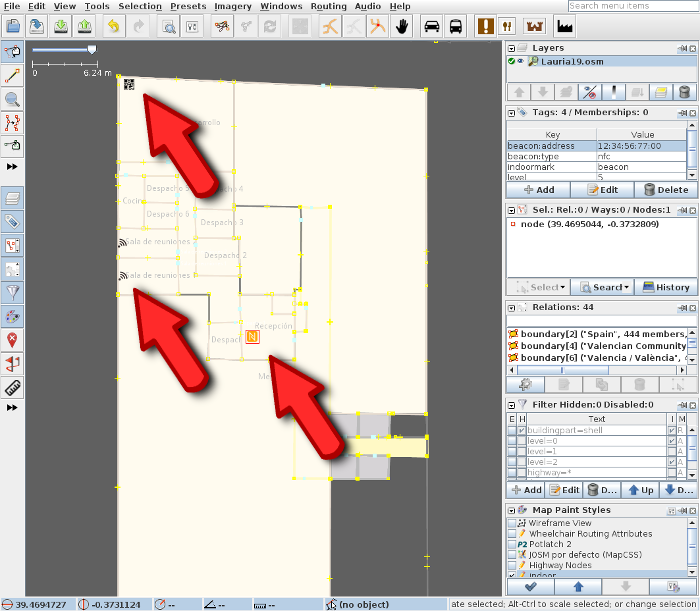 Example of indoor beacons in JOSM

It was approved with 10 votes for, 1 vote against and 2 abstentions.

Yes man_made=beacon could also have a seamark:beacon_*:* tag, or alternative it could have a aeroway=beacon tag, or it could have a new one to identify it as a being indoors.