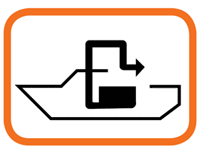 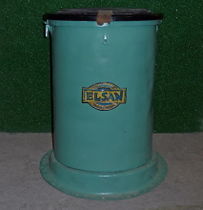 This is very similar to the difference between amenity=fuel and waterway=fuel.

For a standalone boating facility:

For a dual purpose facility (RV or Boat owners can wheel up and dump a cassette toilet):

Please use {{vote|yes}} {{vote|no}} or {{vote|abstain}} and optionally give your reasoning for the vote. Use ~~~~ to sign with your user name & date. Feel free to reply to votes below, if you feel it's helpful, by preceding your comment with ::*.

This tag proposal comes from the exact same person who created amenity=sanitary_dump_station. Even if a Marine station supports a given disposal method, and even if it's on land, it may be inaccessible to a land based user. Without separate tagging, it promises poor searches for both Marine and Land based users. See also the separate tag seamark:small_craft_facility:category=pump-out. If you try to fix this problem with access tags like motorhome=no,you make Marine facilities second class to land facilities. Brycenesbitt (talk) 05:46, 21 April 2015 (UTC)

Because the access tag makes the waterway a feature second class citizen compared to land stations. And because it adds complexity to tagging and rendering, which can increase errors. And because rendering and searching tends to work on top level tags only. Tags like access motorhome=no vehicles=no boat=yes were considered and not found suitable (including in conversation with Gmbo). There are no limits to the number of tags we can invent. There are high limits to how complex the tagging can get and still be comprehensible. Brycenesbitt (talk) 20:15, 21 April 2015 (UTC)

Call me a reason why I have to put two nodes for the same dump station? What you have then in the land stations defined "suction". The access tag is normaly not needed. The distinction is done via the access of the area and the type suction or gravity. If there is both, caravan site and pier, the sanitary dump station has the possibility to pump out and get the waste from a motorhome. I dont understand why this is making Marine facilities second class to land facilities. I think there's the same problem of understanding about how do I make something (pump out a tank, drain through a hose or pour out a cassette reservoir) and what I want to do (dispose of gray water, sewage, with or without chemicals). -- Gisbert (Gmbo) (talk) 06:16, 22 April 2015 (UTC)

Access of the area is both hard to calculate and not sufficient. You save a few seconds tagging, but at the cost of making the map less usable. The dual purpose Marine and motorhome station is a rarity: this is a bunch of worry about a case that just is not very common. If you can show a large number of those stations it would strengthen your argument. Are you aware of even a single example? Brycenesbitt (talk) 06:57, 22 April 2015 (UTC)

Designing tagging for a feature that is not even rendered is not 'tagging for the rendering'. This is tagging to structure the data well. The pejorative tagging for the renderer is the tagging I removed: amenity=recycling to make the icon show up, plus waste=excrement, or amenity=waste_basket,waste=dumpstation, or amenity=fuel plus waterway=fuel to make the icon show up. The access tags are about who can use a facility: useful for a Marina that opens dump stations only to slip holders for example. Brycenesbitt (talk) 09:10, 22 April 2015 (UTC)

That would need to be amenity=waste_disposal + waste:chemical_toilet + vehicle=no + boat=yes, and then you'd not have the flexibility to tag rinse water or the difference between an Elsan point and a Pump-out. Brycenesbitt (talk) 08:58, 23 April 2015 (UTC)

Yes, of course the access=* and related tags can be used on amenity=waste_disposal. As for rinse water, Elsan point, and Pump-out, they're not specifically mentioned in this proposal either. --Peter Mead (talk) 09:29, 23 April 2015 (UTC)

The subtagging is identical to the land stations, see above. sanitary_dump_station:basin is an elsan point. amenity=waste_disposal has not gained traction with Marine mappers to date for good reason. Brycenesbitt (talk) 09:40, 23 April 2015 (UTC)

While I'm in no position to claim what has "gained traction" I can see on taginfo that the undocumented waterway=elsan_disposal and waterway=pump_out tags are already in use. I see no reason why those tags cannot be combined with amenity=waste_disposal. Alternatively new tags related to amenity=waste_disposal could be specified which are more generic for use in situations other than waterways, but that is beyond the scope of this proposal. --Peter Mead (talk) 10:08, 23 April 2015 (UTC)

There are other mappers with the exact opposite tagging desire, complaining about the tag soup of combining features. Chances are we will end up right in the middle, satisfying nobody. Brycenesbitt (talk) 19:50, 23 April 2015 (UTC)

My goal is any unambiguous scheme robust enough to attract rendering interest. Please feel free to make any such concrete proposal. Keep in mind that murky tagging like we have had is hard to fix. Unambiguous tags are readily edited, mechanically or otherwise. And it's not a very limited feature see http://www.sanidumps.com/ Brycenesbitt (talk) 19:52, 23 April 2015 (UTC)

'Sanidumps' seems to have a very limited number of countries supported, and the UK is not one, so I don't see how it helps the case for a generic solution. This is a case where even English is a foreign language and what is normal terminology varies. But I still maintain that we want a SINGLE tag for disposal points with a number of values depending on what is being disposed off and how. A dump station as far as I can see is ONLY a hook up point for a dump pipe, it is not a facility for the safe disposal of an elsan style portable chemical toilet which requires a safe clean down facility. I would not expect to empty a chemical toilet off a boat via a black waste pump out. I would be looking for a chemical toilet disposal facility. Even the current accepted tags are broken! Lsces (talk) 20:39, 23 April 2015 (UTC)

Then propose something comprehensive and rational and work with each community to gain consensus. There have been 5 failed proposals to date: beware. Brycenesbitt (talk) 20:58, 23 April 2015 (UTC)

This PARTICULAR proposal is already fully documented in the amenity key, so all of the boat related material would need to be removed from that, but the case has already been made for NOT splitting things like 'pumpout' so I don't see why this should be any different. We have a key already if THAT is not suitable then lets fix it, but personally I think the name on that is simply wrong anyway as a lot of what we are dealing with is not 'sanitary' at all. The waterway:water_fill has been removed and I think there should be one standard so perhaps 'waterway:fuel' is also wrong. I'm drafting a proposal for 'disposal_point' as an alternative which handles all types of 'liquid' waste, but the 'recycling' camp may shout that down? Lsces (talk) 22:26, 23 April 2015 (UTC)

You misunderstand: the subtagging defined on the amenity applies to the water case as well. You are of course welcome to pursue disposal_point. I started sanitary_dump_station because the generic waste tags just don't have the expressiveness needed to map this particular feature. Brycenesbitt (talk) 23:26, 23 April 2015 (UTC)