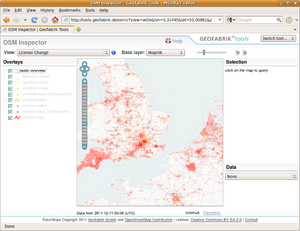 Then if you do, please list the corresponding username in the table (at least for users who have been editing on a larger scale). If you get some response or if the person accepts (or declines), put a "yes" in the third column. Then others will know that the person has been informed and does not need to be contacted again.

Visualising what needs to be remapped

Open the 'options' window (top right) and tick "Show licence status". This will colour each node and way according to its relicensing status: 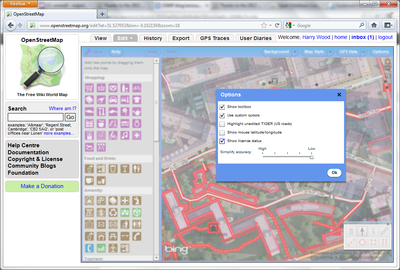 To find the history of a way or node, select it, click 'Advanced', and then click the ID (top left) to open it in the OSM data browser. You can then follow the usual history link. Services that inform you of users who have not signed up to the new Contributor Terms include [1] and [2].

Features in development builds of Potlatch 2 only. Not yet available at openstreetmap.org.

The equivalent license display features are available in JOSM as a plugin.

See that page for basic instructions on use of the plugin and interpretation of the display. The following additional details should perhaps be merged there

The plugin is very useful for determining what needs work, but that's only half of the story (note: the plugin has problems with contributions from anonymous edits users in some situations). Select one of the problem elements and press Ctrl-H to display a full list of mappers who contributed to the object, along with the option to highlight the changes between any two versions. Recent versions of JOSM-latest highlight whether or not each mapper listed has agreed to the licence change. (A green tick means long-time user agreed, a dark gray tick means the user subscribed after agreeing to ODbL became mandatory, no tick means that the user either did not agree, or that they cannot be reached).

Nodes with no tags can simply be deleted and replaced by nodes traced from Bing or other available aerial imagery source. This will almost always improve the data, provided the imagery has been correctly aligned.

Nodes with no tags which are part of ways, which in turn are part of relations, may cause these relations to be affected. To prevent this:

For the following to work in a comfortable way, you need to assign 'n' to "Select Way Nodes" in keyboard shortcuts ('F12')

For nodes and ways with tags it may be names or other tags need to be dropped.

Ways that have numerous problematic nodes were probably created by splitting a non-ODBL-ready way and need to be replaced as well.

When a way is part of relations, it becomes tricky to make sure you re-add it to all its relations. There is a better way. Find the first segment of the way and split it at its second node (p). Then delete the little chunk that remains and confirm you want to remove it from all those relations. Now select that second node (which became the first and is now hanging loose) and press (a) to reconnect it to the junction or the orphaned section.

If a way only has two nodes. Add one in the middle and do as above. Only instead of using (a), select both end nodes (first the one of the way you are 'rescueing', then the one of the junction) and press 'm' to merge those 2 nodes again.

To "rescue" a relation, one way would be to replace it, using the copy function in the relation editor, adding ttt to the name, removing the original relation, then removing the ttt from the name of the copy. However, such "duplicate, delete, rename" methods deliberately remove the history of the elements, and make it extremely difficult to separate the compatible data from the non-compatible data. Such duplication should only be done on completely compatible data.

Some relations are problematic, as most have been modified so often already that their history won't even load in the browser window anymore (even with the ones for which the history is available). It's next to impossible to know what the right thing to do is. If you do replace it with a fresh copy, make sure it's as correct as possible (members and tags) and has as few tags as possible. The builtin history function of JOSM has recently been improved tremendously, so it's preferred to use that one instead of the one that opens a web page. It may take a long time, but it will always display the full history of an element.

The License Change View on OSM Inspector can also be setup as an image layer in JOSM using the TMS-URL tms:http://tools.geofabrik.de/osmi/tiles/wtfe/{zoom}/{x}/{y}.png