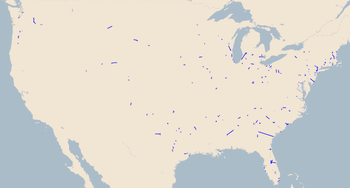 Waychains TIGER fixup is an analysis tool for TIGER fixup by Harry Wood, which was designed to reveal any remaining problems with motorway connectivity in the U.S. It was a follow on from TIGER fixup/250 cities initiatives, and was set-up in late 2009.

This tool is not as easy to understand or interpret as other tools like the duplicate nodes map. It won't point you at an exact and obvious problem to fix. It also gets a number of 'false positives' for various reasons, and in fact many of the glaring errors which this tool identified, have now been fixed, and so it is perhaps coming to the end of its useful life (see #Shutdown). You can still find problems using the tool, but you'll need to be ready to do some investigations within the data following a look at waychains report. Ready for the challenge?

The analysis is restricted to ways tagged highway=motorway in the U.S. It is basically checking that the ways are joined end-to-end to form an unbroken sequence. This includes ensuring the ways are pointing in the right direction, so the end of one way should meet the start of the next. On most highways this is not important, but motorways are generally tagged oneway=yes (or assumed to be oneway). An unbroken sequence of ways is a "waychain".

In the output map displays, waychains are shown as straight blue lines. This lets you see where each waychain starts and ends, which is normally all that matters.

Any given interstate should have two waychains. One in each direction. We would expect that these would run parallel to each other, and start and end in same general area (only opposite directions). The analysis checks this (checks the bearing of the two waychains is approximately 180 degrees different) and labels a Paired interstate if everything looks hunkydory.

The ways are grouped by int_ref value or the ref value (int_ref has preference) This should be the reference number of the interstate. Within each ref, you would expect all the ways to join nicely end-to-end.

Sadly it seems there are lot of problems with the tagging of ref values, and so the analysis tends to reveals that rather than more interesting connectivity problems. Still... it would be a good idea to sort out the ref tagging too!

Remember, as with all TIGER fixup/250 cities automated reports, it is mainly intended as an indication of where the problems are. Although you can do quick fixes to tick off the problems highlighted, you are encouraged to take your time, take pride in your work, and go for some detailed TIGER fixup in these areas (Use the Yahoo imagery to place the roads more accurately, draw in bridges, etc)

Some fixes may require local knowledge, but there's a few general things to sort out using the waychains report:

Some motorways have two different names. In that case mappers may have decided to stuff both names into the ref tag. We might question whether that is a good idea. After all we have tags 'name','ref', and 'int_ref'. Do we really need to squeeze two different names onto the ref tag? Anyway for the moment let's assume that's not something to fix. Many roads have two different names because they are what's called "concurrencies". That's fine. The waychains analysis has no special logic to deal with ';', so it will treat these as a new ref value i.e. a new named interstate. Hopefully it will find a nice pair.
Having said that, there are lots of totally bogus ref values with several ';' in them. This may be a bit of mess creeping in due to editors being a little too quick to automatically frig around with tag values (and users not being aware) when merging ways. We need to figure out which of the two values is correct at that point. This may require local knowledge, or may be clear.

Note: Don't confuse ways with waychains. There is nothing wrong with a interstate being made of up many hundreds of ways. We'd like a new way representing every bridge for example. Merging ways can be useful, if there's no different tagging on the two sections of road, but as long as ways connect end-to-end, the waychain is good.

Harry can run updates on dev on a daily basis, but it involves a couple of non-too-efficient osmosis processes (total planet update followed by throwing away 99% of the data) Suggestions welcome.

You can see some of the code and other files here: https://harrywood.dev.openstreetmap.org/waychains/

This includes a couple of tsv outputs you might find interesting

Some time soon the tool may be shut down, or scaled back to a weekly update cycle.

Nobody has expressed a great deal of interest in it (Leave your comments on Talk:TIGER fixup/250 cities/waychains or talk to Harry Wood more directly) The daily planet update process consumes a lot of resources on dev. It could be made more efficient, and also tweaked to be more useful, but Harry hasn't had time to develop it much.