From OpenStreetMap Wiki
Jump to navigation Jump to search
Tag:building=collapsed - Other languages 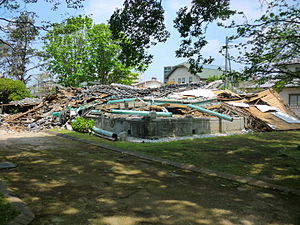 building=collapsed is problematic for multiple reasons.

How to map no longer existing buildings?

OSM is not a place for mapping no longer existing things.

But sometimes recording that building is gone may be useful, for example to avoid remapping by armchair mappers using outdated aerial images. Consider retagging such objects as demolished:building=* if there is a significant risk that other mappers may mistakenly recreate it.

Once there is no risk of accidental recreation, such objects should be deleted.