From OpenStreetMap Wiki
Jump to navigation Jump to search
Tag:canal=qanat - Other languages

canal=qanat is used with waterway=canal and tunnel=yes to specify a qanat, also known as a faraj, khettara, kariz or kanez - a gently sloping underground channel used to transport water downhill from an aquifer or water well to the surface, commonly found in the Middle East and surrounding arid areas near hills or mountains.

A qanat is usually built with vertical ventilation shafts along it's course, which can be used to verify the route of the underground waterway. These have been mapped as nodes with the tag excavation=qanat_shaft

For more details on this tagging scheme, see Proposed features/Qanat. 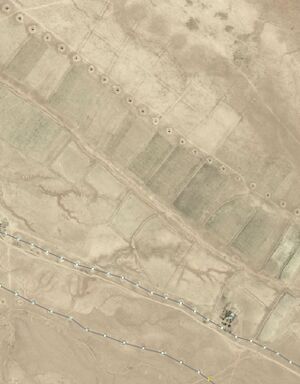 Quanats - both mapped and unmapped ones
Retrieved from "https://wiki.openstreetmap.org/w/index.php?title=Tag:canal%3Dqanat&oldid=2148819"
Categories:
Hidden categories: