A qanat is a specialized kind of underground aqueduct which is the traditional way of supplying water in hot and arid climates within limited distance of a mountain range. Developed some 3000 years ago, they still serve thousands of people worldwide. It originates from Iran or Oman and is most widespread across South-Western Asia, from Mediterranean to Himalaya with a presence in North Africa and south-eastern arabic peninsula.

It consists of an underground gallery that drains water from the aquifer at first (collection section) and then channels it (transport section) along a gentle 1/1000 slope, with a series of vertical shafts which are artifacts of the building process but also serve for ventilation and service access, with an opening of the channel section as it reaches the groundlevel and a a further open air canal.

You may read more about it in a great article at Wikipedia.

The following features are considered essential:

Different tags will be needed for water channels that do not satisfy these requirements, e.g. spring flow tunnels near Jerusalem.

A qanat is a distinctive form of aqueduct. The presence of frequent vent/excavaton shafts along the course of the qanat makes the precise underground route of the tunnel verifiable by survey or aerial imagery, unlike with many other underground features. While most qanat are used for irrigation and drinking water, the existing tags like usage=* are not sufficient to define a qanat.

This proposal is necessary because a number of qanats have also been mapped as man_made=qanat recently. It is recommened to use waterway=canal because these features are a form of man-made waterway which carries useful water, and add canal=qanat to describe the unique construction method and characteristics of this feature, as a kind of canal. Using the key man_made=* would be appropriate for a feature which is not only a canal: for this reason man_made=pipeline is used since pipelines can carry waterways, or oil, gas, etc. But a qanat is always a class of canal, so a top-level feature tag like man_made=* is not appropriate or necessary.

Despite the widespread use of pipelines and pumps, qanats still provide water for many people. They are gravity fed and physically limited in how much they impact groundwater levels. Compared to pumps, which require power and enforcement of pumping regulations, qanats can therefore be considered a sustainable and environmentally-friendly way of using water from natural resources.

Qanats are underground structures, vulnerable to unplanned ground works. Mapping them could hopefully save some of them from destruction.

Afghanistan is probably the country most dependent on qanat network, however after decades of wars large part of it lay in rubble. Having tools for mapping qanat could help rebuilding them in the future, when (hopefully!) the situation improves there,

Despite being mostly underground structures, qanats are quite easily traceable from satellite photos and surface surveys, due to the openings of vertical shafts (see below).

As they are used to access groundwater, mapping qanats can also help characterise groundwater resources and their use, and is therefore highly relevant to groundwater management in these regions.

A single village may have several qanats, and qanats can be found in a number of countries in Africa, the Middle East and central and south Asia. It is possible there may even be 100,000 qanats worldwide. Mapping them explicitly in OpenStreetMap will help in determining their spatial distribution and significance.

History of this proposal

This proposal builds on three previous proposals for tagging qanats:

Qanats are firstly a means of conveying useful water in free flow. It is therefore tagged with the generic waterway tag waterway=canal, on a way which is drawn in the direction of water flow (downhill). The nodes along the way should usually be located at the center of the vertical shafts, when these are visible.

The tag tunnel=* should be added, and you can a negative layer=* value when necessary. The tag canal=qanat defines the waterway as a qanat. Tags for width=* and usage=* may be added when known.

A qanat is not a pipeline (man_made=pipeline) because it is not built out of pipe assemblages, and is longer than a culvert used to convey water, e.g. under a road (tunnel=culvert).

Qanats that are locally known by a common name can have a name tag e.g , name=قنات, name:en=* etc.

If the width of the qanat is known it can be tagged with width=* in meters, e.g. width=0.5

Qanats of historic value can additionally be tagged with historic=*. If in doubt about historic value, do not tag it as historic.

Qanat shafts are to qanats what power towers are to a power line - the feature that is most obvious at ground level, and in aerial imagery. They are primarily excavation holes, not usually intended to access water (not man_made=water_well) or extracting another resource (not man_made=mineshaft). They are tagged with the generic man_made=excavation, and subtag excavation=qanat_shaft

An example of mapped and unmapped qanats. East of town Mastung in Pakistan, south of Quetta. 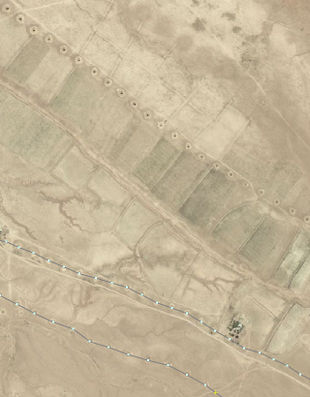 The way is tagged with canal=qanat, draw in the downhill direction in which water flows, while the nodes have excavation=qanat_shaft tag.

Qanats will generally be rendered the same as other types of waterway=canal + tunnel=* features. Some specialized rendering applications may choose to render qanats with a specialized style.

In specialised maps, it may also be useful to mark shafts as they are large and observable terrain features.