From OpenStreetMap Wiki
Jump to navigation Jump to search
Tag:natural=landslide - Other languages

Landslides or landslips are ground movements down a slope of solid rock or superficial deposits, or both together. In OSM terms what is mapped as natural=landslide is the debris field. Landslides may be of various types: mud flows, bog slides, Bergsturze, etc. See article on Wikipedia for a more extensive list

Landslides usually occur when rock strata, or superficial deposits overlying rock strata are not tightly bound together (often described as incompetent strata). One or more layers may deform plastically causing slippage. Other causes which weaken slopes are weathering, notably freeze-thaw cycles, and loss of support through, for instance removal of vegetation cover or glacial retreat as a cause of global warming. Typically the actual landslide event is triggered by extreme weather, earthquakes or volcanic activity. 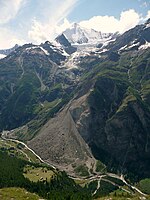 Landslide debris is often very jumbled, and thus takes a long time to establish a suitable soil horizon for renewed growth in vegetation. Thus the debris fields can readily be recognised on aerial imagery for many years after an event.

A significant numbers of landslides result in loss of life every year.

Historical landslides can be recognised particularly in many mountainous regions such as the Alps. Please do not use this tag for these older events, such as the Flimser Bergsturz. A suggested tag is geological=landslide.

Landslide debris fields consisting primary of scree, such as

Randa rockslides the Randa Bergsturz should be mapped as natural=scree, perhaps with landslide=rock_fall

To map an area of the landslide you can just draw a line closing on itself, marking the area of debris field and tag it natural=landslide. To map large scree covered areas you can use Relation:multipolygon with the same tag.

If there is a visible scar on a rockface above the debris field (e.g., Arth-Goldau) this can be mapped using natural=bare_rock or natural=cliff.