From OpenStreetMap Wiki
Jump to navigation Jump to search
Tag:natural=ridge - Other languages

natural=ridge is used to tag a ridge: a hill or mountain landform with a continuous elevated crest. The sides of the ridge slope away on either side of the crest. The line along the crest formed by the highest points is called the ridgeline.

For sharp, rocky ridges use natural=arete instead. For a one-sided steep drop use natural=cliff.

For mapping ridges make a way along the crest of the ridge and add name=* to specify a name. The way should only be drawn as far as there is a continuous elevated ridgeline, it should not be drawn across valleys or plateaus. The way should connect saddle points and peaks if they are along the same ridge.

Ridges longer than a few kilometers in length should be mapped with several shorter ways, divided at natural=saddle or natural=peak points. This is generally recommended for long linear featurs, such as waterway=river and highway=*.

Some mappers recommend drawing the ways so that each points up the ridge toward higher ground. Such mapping would allow rendering ridges in a way that shows the upward direction. However, since this requires reversing the direction of the way at each saddle or peak, database users should not expect all ridges to be mapped in this way.

A ridge implicitly divides drainage basins, ranging from small streams and creeks to huge rivers. This tag may later be used to derive, in conjunction with river and stream tags, the boundaries of drainage basins. However, the tag natural=ridge should not be used for flatter portions of drainage boundaries where there is not a prominent ridge line. 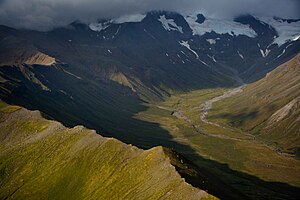 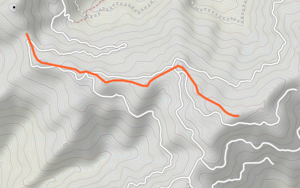 Walker Ridge, Klamath Mountains, California This ridge continue north as OSM way 631166206, and on the east it meets an unnamed ridge

Unnamed ridges near La Galana peak, Ávila, Spain Note that the way stops before the saddles, where the land flattens out. Each ridge is mapped separately. See test rendering (below) 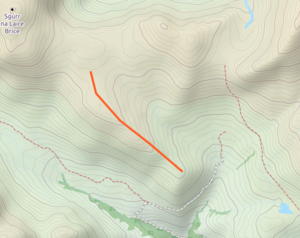 Druim Eileasaig Note that the ridge ends where the land flattens out on the north side. It does not continue across the flat area.

Branching ridges in the Caucasus mountains These ridges are not named, but they connect named saddles and ridges. Ridges often form branching patterns, similar to streams and rivers See test rendering of this area which shows the pattern of ridges (right) 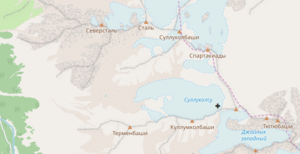 Test rendering of ridges in the Caucasus 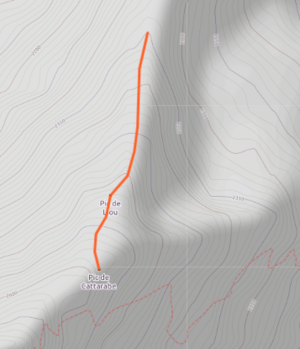 Crête du Liou, a ridge in France, zoomed out

Crête du Liou, a ridge in France Note that the ridge begins at a saddle and ends at "Pic de Cattarabe", where another ridge joins up from the east. To the southwest it continues as a natural=arete named Crête du Moun Né