From OpenStreetMap Wiki
(Redirected from Tag:railway=dismantled)
Jump to navigation Jump to search
Demolished Railway - Other languages 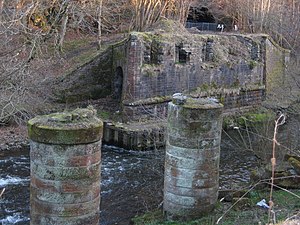 Railway tracks are gone, but physical remains are still present and it is OK to map them as railway=abandoned

Here, the railway is gone without any clearly identifiable trace in terrain. Its course is known from various documents, but such historic features are out of scope for OpenStreetMap, should not be mapped, and can be deleted if mapped. website comparing modern situation from past one when railway existed

Overall, mapping such features is acceptable where some remains like embankments, remains of bridges, etc., remain, even if rails are gone. In locations where the railway has been replaced by new buildings and roads, the mapping of such features becomes out of scope for OpenStreetMap. Historical mapping can occur on Open Historical Map.