From OpenStreetMap Wiki
Jump to navigation Jump to search
Tag:sport=baseball - Other languages

Baseball is a bat-and-ball game played between two teams of nine players each who take turns batting and fielding.

Since this is a non-physical tag it should be combined with other (physical) tags, eg:

How to Map Baseball Fields

When mapping baseball fields (pitches), it is recommended that the entire playing field should be mapped not just the infield. When there is a fence surrounding the field, the mapping for the field should match the fence. However, many baseball fields are shared with other sports, and don't have a fence designating the exact boundary of the outfield. Without a fence, the actual size of the field is ambiguous. Also, making things difficult is that baseball fields used by small children have much smaller outfields compared to full sized fields used by adults. For fields without fences, map a pie shaped area where the end of the outfield is at least 2 times to 4 times the length of the infield diamond. The example image below shows a small baseball field, with a small outfield, for children. 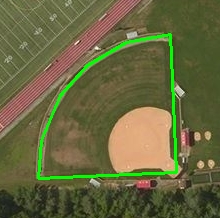 Related sports may be played on the same or similar fields. The vast majority of the population of the world are unaware of the differences between them, so generalizing to baseball is reasonable. Softball, Slo-pitch and Tee-Ball may be tagged as baseball or as a sub-category of sport=baseball, so using several tags as follows:

A pictogram for baseball