Forward and backward directions implicitly refer to an associated way. Thus it is possible to deduce a direction along a way from a given single node, preconditioned that this node is part of exactly one way (or, depending on context, highway). 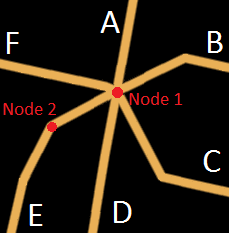 How should these questions be comprehensibly answered?

Note that a tiny modification along the way might already cause a direction mapping change. It's furthermore complex to implement this mapping in an algorithm.

Since traffic signs and traffic signals always have a direction that is related to the direction of the road, it is much easier and less error-prone to simply use "forward" and "backward" directions for those instead of angles and cardinal directions. --Emkey08 (talk) 12:47, 26 August 2013 (UTC)

This tag isn't just for traffic signs and traffic signals though, but also for benches, billboards, vineyards, roofs (with a prefix) and whatever. These do not have inherent linear directions. So the cardinal directions work for many more feature types.
What I particularly dislike about your edit is that you moved the forward/backward to the top - despite the facts that they only work for a very limited subset of cases, and that the cardinal values are from an approved proposal. But more generally, I'm worried that documentation and editor support gets a lot harder with different value sets for the same key. So the solution I would like the most would be to split off all the binary value pairs (such as forward/backward) to a more specialised key, as has already happened with up/down. --Tordanik 15:13, 26 August 2013 (UTC)

Please feel free to insert the forward/backward section below the angles and cardinal directions section.
I agree that it's not optimal to have different value sets for the same key. On the other hand, different value sets are actually also in use by having
* an integer for a direction given by an angle,
* keywords for the cardinal directions,
* keywords for clockwise and anti-clockwise orientation.
So the problem isn't about the forward/backward values only. From a technical point of view however, those values can luckily all be well distinguished, so the issue is actually more an esthetic one IMHO. Suggestions for improvements welcome. --Emkey08 (talk) 15:53, 26 August 2013 (UTC)

Thanks, I think this - along with your most recent edit - indeed improved the page. The fundamental issue with the various value sets is not as easy to solve, of course. I wish I had a good solution. --Tordanik 02:31, 30 August 2013 (UTC)

In my opinion there's no interest to do that. All standards use these abbreviations in uppercase only. What is important however is to use the English abbreviations (except in translatable names such as streets, where they follow the language conventions). If this causes a problem, we could just say that the values are not case-significant.
They would be lowercase if they were not abbreviated, but OSM practices are for words in lowercase (in British English as much as possible), but this does not apply to abbreviations and acronyms.
As well lettercase is important for measurement units and follow the standards defining them (SI units are very strict about this, and in multiple prefixes an "m" does not mean the same as "M").
So it's best to not change anything, it reflects the most common usages and conventions — Verdy_p (talk) 14:14, 13 July 2017 (UTC)

direction=* is defined as a number; tourism=viewpoint shows an example as direction=0-90, or <number>-<number>. This usage is viewspread but seems not to be documented at all. Either the documentation or the usage should be fixed. --grin ✎ 13:20, 12 May 2016 (UTC)

It seems that the alternate syntax allows specifying a single range of angles
However these precisions are not clearly documented:
Some other objects may need more than one angle ranges, separated by ";", e.g. radio emitters or maritime signalisation for their coverage.
— Verdy_p (talk) 15:22, 12 May 2016 (UTC)