Maybe this wasn't clear enough: This is not to tag the position of the sign. You just tag it to the way or area it applies to. As for the more complex signs: This proposal just provides a tagging scheme to tag more (and in a consistent fashion), not necessarily everything you may come across. --Driver2 20:45, 8 April 2009 (UTC)

If one person per 100 houses decides to help in a particular town, it will not take long to get many useful signs (at least of various types). I anticipate finding people to do this for where I live. It would be a shame for osm not to accept such data. If signs are broken up into groups (as is already the case, eg, bus_stop), then this can certainly be managed. Navigation systems of many sorts are more than possible and I think desirable, usable even offline since few changes take place per day and an open provider can maintain a simple mechanism for auto updating from an ordinary website query. Since people are going to do this, we should probably continue to seek out standardization. Jose X 20:05, 22 April 2012 (BST)

This however won't work if the values contain any of the separator characters. Key:opening_hours for example can contain both ';' (semicolon) and ':' (colon). Of course we could define another syntax to specify hours for traffic signs, but opening_hours is already in use and pretty versatile. I'm all for easy parsing, but it should also be relatively stable. --Driver2 23:53, 31 May 2009 (UTC)

Every country-specific sign-code should get a country code prefixed, because that would make parsing much easier. If we only want to say the sign is in Germany, we could also use is_in:country=Germany, but traffic_sign=260 has no global meaning and we need to call it DE:260 to make it unambiguous. So every ";"-separated value is selfcontained and we could use tags like traffic_sign=DE:260;city_limit;DE:1020-31;stop;DE:1040-30. --Phobie 14:25, 1 August 2009 (UTC)

How should we define the signs? And how should we make available the icons for rendering and routing software? I know that most countries have defined names/references for each (non-text) sign, but these definitions (or the sign icons) are not always in the public domain. Besides, a sign database available for everybody must be made available together with such a proposal, or it will turn into a series of cryptic codes. --Skippern 10:04, 19 July 2009 (UTC)

I find the idea of tagging traffic signs useful but would propose generic values for common traffic signs (e.g. traffic_sign=danger or traffic_sign=maxspeed) rather than national codes. That way a parser can make something useful out of it MUCH more easily, and it's also way easier to map (poll: how many mappers can tell the sign number for the stop sign in their national road code off the top of their head? how many can tell me what sign 126 in their national road code stands for?)

Since there is a fair amount of traffic signs which are similar in a lot of countries, with minimal visual differences (or different appearances but with the same meaning), it shouldn't be too hard to come up with a set of codes. If someone really needs national codes, we might add an extra tag for that, e.g. traffic_sign:nat_code=*. If the set of international codes is defined well, that and the country in which the sign is located are sufficient to write a preprocessor which automatically generates the national codes. --Stanton 18:41, 12 March 2011 (UTC)

Here's the Vienna Convention on which many of the signs are based: http://www.unece.org/fileadmin/DAM/trans/conventn/Conv_road_signs_2006v_EN.pdf. And here is the source for UK signs: http://www.legislation.gov.uk/uksi/2002/3113/contents/made. Perhaps the international signs should be referenced to the Vienna Convention rather than national standards? Sdoerr 23:30, 14 March 2012 (UTC)

Need to show what is direction of sign. In other words, routing and other software need advice to determine which side of sign is located in city. 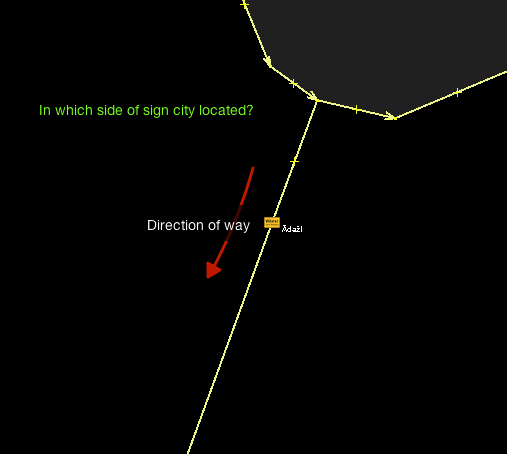 And other question. Can traffic_sign=city_limit be located on junction node? I think not, otherwise is hard to determine on which way it is applicable. -- Aleksejs 16:31, 16 July 2009 (UTC)

There is some proposal traffic_sign:forward=*, traffic_sign:backward=* at Talk:Proposed_features/Traffic_sign. Seems enough good for me. -- Aleksejs 22:33, 16 July 2009 (UTC)

But be careful: traffic_sign:forward/backward=* was proposed in the context of tagging it on ways, not nodes. Using direction-dependent tags on nodes can be a lot more tricky: You can only use nodes, that belong to exactly one way. While junctions can be easily spotted, you also have to avoid nodes between two ways (where they have been split, but are connected by a node) or of ways that lay on top of eachother (like area borders on a street). The latter could be resolved by only considering the way with a highway=* tag as the one to take the direction from, but the other cases would still be ambiguous. These could of couse be circumvented by some editor support (e.g. output a warning when adding a direction-dependent tag to a node that belongs to several ways). --Driver2 13:04, 8 August 2009 (UTC)

Should signs (on the same post) that belong together be grouped or just be ordered the same way they are in reality?

Grouping would explicitly say: Those belong together. Sorting would require you to check which signs can or have to belong to others. On the other hand, Grouping requires mappers to know which signs belong together, while Sorting is more natural, since it's a just a representation of the real traffic signs (they are also ordered in a certain way). --Driver2 12:48, 8 August 2009 (UTC)

I want to use some designations for preventing warning traffic signs. Please, look at my proposals, support them or propose another. If you know analogous traffic signs in another countries, you can add it to galleries. Dinamik 22:09, 13 March 2012 (UTC)

I think the usual English term is "warning signs" rather than "preventing signs". HillWithSmallFields 11:30, 14 March 2012 (UTC)

I would like to propose additional tag traffic_sign:extent=* for sign, which shows extent of action of some another sign. Marking of measurement unit is obligatory. For example, File:1.16 (Road sign).gif

Can I suggest that we now treat this proposal as agreed and move the above table of traffic signs into the main tag page. I say that because this discussion has been rumbling on since 2009 and there are already 100,000 usages of the tag so far and no one seems to have objected to the approach. Thoughts? PeterIto 14:00, 18 June 2012 (BST)

Also... It was my understanding that the traffic sign tag was mainly used as a node at the point where there is a sign planted in the ground. This proposal as written seems to imply that it is applied to all the ways affected, and some of the discussion above that it is used on a node within the way. Can people clarify on the traffic-sign tag page how it should be used. Personally I was expecting that it would be attached to the location of the actual sign to allow 3d rendering and games rendering etc etc to produce realistic representations of what can be seen and where as one travels down a road. PeterIto 14:48, 18 June 2012 (BST)

There are two different styles of using the traffic_sign key:
This proposal describes the second variant, and Taginfo confirms that the two groups are surprisingly distinct. I don't think there is necessarily a conflict, though - if a traffic_sign value is used on an isolated node, then it's probably the position; if it's used on a highway=*, then it's probably the list of signs affecting this road segment. --Tordanik 16:01, 18 June 2012 (BST)

OK, thanks. So would it be reasonable to clarify that difference on the tag page given that there is certainly considerable use already of both methods? PeterIto 17:29, 18 June 2012 (BST)

Maybe, though I'm not sure whether that difference actually makes much sense. I'm just observing that it exists. --Tordanik 16:26, 19 June 2012 (BST)

Anyway, I've tried to make the distinction a bit clearer and have also added some information from the proposal that was missing on the key page (such as the distinction between comma and semicolon separators, and brackets for values) --Tordanik 12:47, 21 June 2012 (BST)

Thanks. I am now beginning to understand how the tag is used myself, which is always a good start :) Are we agreed that we are going to document how this tag is currently used and are not going to try to get people to change how the are using it by proposing a new tag for one of the uses? PeterIto 15:07, 21 June 2012 (BT)

I have no intention to set up a proposal related to the traffic sign issue anytime soon, so yes, I'm just trying to document existing usage of traffic_sign. (One caveat is that I would like this proposal to be documented on the key page either as a whole or not at all, but not partially. It is internally consistent, so just cherry-picking the most frequently aspects of it wouldn't be a good idea imo.) --Tordanik 16:33, 21 June 2012 (BST)

Agreed. The key page should either be a redirect or be a page describing the recommended use of the tag with a 'See also' link at the bottom to this original proposal. Given that there was already a page on the key page I suggest we add all of the current usage to it treat the proposal as 'approved'. PeterIto 17:15, 21 June 2012 (BST)

I'm fine with that. I've used Template:No_vote_feature_link above the Proposal_Page template for similar cases before. --Tordanik 17:35, 21 June 2012 (BST)