My only comment it that apiary is not an obvious word for someone who is not familiar with bees, especially if English is not their first language. Something to do with beehive is more likely to be found by your average mapper searching the Map Features page. Chillly 18:55, 4 July 2012 (BST)

What is the current state of this proposal? I have bees myself and started looking into mapping the beehive just recently. I would support the use of beehive before apiary. Additionally I propose to use a tag beehive:type=* to tag to type of the beehive (like Warre, Top Bar, etc.). See Wikipedia Beehives for more. I created a uMap with the locations of beehives http://umap.openstreetmap.fr/de/map/bienen_22764 --FreeMinded (talk) 10:52, 29 November 2014 (UTC)

I think that using man_made=beehive is far better than landuse=apiary. The two terms have different meanings. According to my dictionary, a beehive is a structure where bees are kept. However, an apiary is a place where bees are kept, while apiculture involves the breeding and care of bees, with the person who cares for the bees often being called an apiarist or beekeeper interchangeably. While a beehive is clearly a man-made object for housing bees, an apiary is more obscure as this is where apiculture occurs, and that not only involves keeping the bees, but also breeding and caring for them as well as presumably harvesting and processing their products, such as honey and beeswax. To me, this means that apiculture should be the term used for landuse, rather than apiary, which I see as more like a special form of farming (or agricultural) activity that occurs in a building rather than being a distinct land use. Since apiculture is never going to be a primary landuse outside a building, it follows that the tag landuse=apiary is unnecessary as it can always be replaced by other tags. Assuming this is still just a proposal, I would suggest the proposal be rejected as being superfluous. - Huttite (talk) 00:09, 20 April 2017 (UTC)

It may be quite difficult to map the beehive individually, because they can change quite a lot: when the bees died, the beehive usually is removed until a new swarm is taken in it. Some apiarists transhumes their beehives each years from an apiary to another, in order to have some special honey.

On the contrary, the apiary is much more stable, the area defined as apiary usually do not move from years to years . You may have ask the permission to a farmer to put your bees, so you wouldn't like to negocociate it each year. In France for instance you have to declared only the apiary to the authority, not the beehives individually.

I agree to say that the primary land use is not an apiary, but a part of a forest, a meadow, etc. That's why I propose below to just add apiary=yes to the landuse (or building). Maybe just a tag bees=yes would be easier to understand? --Adrieng (talk) 17:44, 21 April 2017 (UTC)

Landuse vs man_made vs amenity

I thought the same earlier today, but then decided to propose landuse=apiary because of apiary's definition (An apiary is a place where beehives of honey bees are kept). So, an apiary can be treated as an area with specific usage, while beehive is usually treated as a man_made=* thing. Considering this and also Chillly's comment, maybe man_made=beehive or even man_made=beehives is more suitable? --Tormi 23:29, 4 July 2012 (BST)

If you look the key man_made, you will see that many of them already apply to areas. Another problem with landuse is that will enter in conflict with other landuse values like forest, grass, orchard or farmland. --Pieren 10:32, 5 July 2012 (BST)

There are still much to do in our tagging-key system. As I understand it isn´t the beehives themselves you want to map, rather the information that the place is used for keeping bees. The keys we have for describing use is landuse, amenity and service. Amenity is supposed to map something neccesary that someone would be looking for, in need of, I don´t think anyone feels the need for a bee. Service is almost the same. Landuse is as Martin says usually something larger, otherwise it is the nearest thing. I guess your apiary could lie inside a landuse=agriculture (hmm, doesn´t exist maybe landuse=farmyard). Maybe time to take up the old abandonded Proposed features/Use.
I simply suggest apiary=true (detailed mapping of every beehive, could be beehive=true)/Johan Jönsson 18:56, 6 July 2012 (BST)

As I understand it isn´t the beehives themselves you want to map, rather the information that the place is used for keeping bees. - yes, that was my idea.

I don´t think anyone feels the need for a bee - actually, you might be wrong on this one, read this for example: Spa, pool, gym... and a beehive? The new must-have hotel amenity ;) But I agree that amenity isn't the term we should use. I like your proposal about using apiary=yes and/or beehive=yes --Tormi 19:56, 6 July 2012 (BST)

I agree to some extent with the info above. man_made seems to be the most correct, as a beehive can be naturally occurring (not everywhere, obviously). Hence, a man_made beehive should include tags such as operator and other contact info. Many beehives are stationary, and/or the same spot is used over and over again by the same beekeeper. So I would very much like it to become a valid tag, as it would serve a purpose having a visual impression of density of beehives or contact info for a beekeeper. Andersar 20:41 18 March 2015 (GMT+1)

I see that the Proposition has not moved since 2012. I think too apiary=yes is a better idea than landuse=apiary, as we can apply it to landuse, but also to buildings, for big apiaries. Maybe we should update the proposition ? I would also like to propose the tag shop=apiary for shops which sells stuff for beekeeper. What do you think ? --Adrieng (talk) 16:54, 4 February 2016 (UTC)

My uncle is a beekeeper in New Zealand, and he is always moving hives around. During the kiwifruit pollination season he'll move hundreds of hives onto the farms, in rest of spring and summer he'll put hives near the manuka trees or clover to get different types of honey, in winter they may go somewhere else so he can feed them easily. The timing on these changes every year depending on what flowers bloom where and when, weather, what contracts he gets with which farmers etc so a start and end date are not really valid. Should there be some tag for sites that have hives only for some of the year? Maybe intermittent=yes? DancingFool 04:57, 5 July 2012 (BST)

To my knowledge most of the beehives (apiaries) that you see around in central Europe are mobile. I suppose that the situation is similar in many other regions. Hence they are really not mappable objects.

I would only map those that are in clearly defined, permanent buildings (with the building tag as suggested below)

If you want to have information of the species of bees, as in apiarymap, you could use the key taxon, e.g. taxon=Apis mellifera mellifera./Johan Jönsson 10:14, 17 July 2012 (BST)

If you want to map where honey is sold (by the beekeeper herself) you can use craft=beekeeper. I imagine this tag beeing used for stationary beekeepers that sell what they produce and that the tag should be at the point where the beekeeper lives, not where the bees live. Probably you could use this tag also for some kind of bees-for-rent business where the beekeeper is paid to move out the bees to an orchard that need pollinating./Johan Jönsson 08:33, 18 July 2012 (BST)

An apiary with building

I think a combination of landuse=* and building=* is no good idea. Please see also my discussion post below (chapter "Single beehive vs several beehives"). --sperlingskauz (talk) 14:45, 20 January 2018 (UTC)

An other apiary with surounding area

How should i map this apiary? 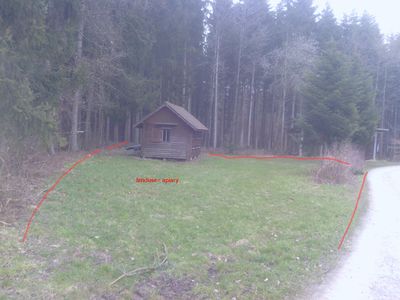 Apiary in Switzerland between hedge and forest

Right of the track there is farmland (not on the image). I think the hedge is there to protect the apiary from exposure like wind and sun. The grass wouldn't be there, if there wouln't be an apiary. This would be to expensive for the farmer to maintain. So for me it's clear, that the hole area between track and forest (hut, grass and hedge) is used for the apiary.

This kind of apiary are realy frequent where i life, in perimeter of 3km i know 3 of them.

How would you map this?

I would use the tagging landuse=meadow for the meadow and the tagging building=* for the building with an additionally node man_made=beehive. Please see also my discussion post below (chapter "Single beehive vs several beehives"). --sperlingskauz (talk) 14:48, 20 January 2018 (UTC)

A few years have passed since the last discussion. If I look at the usage of the tags today, then I think man_made=beehive is unique set and landuse=apiary is almost set. All we need is a solution for beehives located in buildings. A building can be a house or a wooden hut or even a wooden caravan. In detail:

Is it really a good idea to use such highly specialized landuse value? I would tag it as landuse=farmland + farmland=apiary, to allow typical data consumers to use data Mateusz Konieczny (talk) 09:12, 30 January 2018 (UTC)