From OpenStreetMap Wiki
Jump to navigation Jump to search
Talk:Relation:destination sign - Other languages

I think it would be helpfull to have a tag that describes, what tape of vehicles the sign is meant for. E.g. in the area I live, there is a huge cycle-network with many signs. A routing-software for cars should not use this sign. A driver in a car would not be able to read them (And i think, he would not even try to). Snoopy88 09:12, 29 March 2010 (UTC)

Agreed, but personally I'd use bicycle=designated for bicycle specific destination signs, bicycle=yes just means the sign applies to bicycles but doesn't exclude motor vehicles, whereas bicycle=designated makes a stronger assertion and you could assume to only apply to bicycles unless otherwise stated. --Aharvey (talk) 01:18, 27 April 2020 (UTC)

a relation for each direction

I'm wondering if it is meant to create a relation for each direction. In my case I map guideposts which are regularly have more than one destination. Therefore a huge guidepost requires ten ore more relations. Furthermore the role from is not really applicable 'cause the post stands not in front of a road. This problem also occurs if there is more than one destination printed in one direction. What is the resolution for routing software that couldn't decide which destination_sign relation it has to choose?

I create a destination sign relation for each destination on a guidepost, which can be a lot of work. I am not clear about the from-relation either. I wonder if it could be sed in cases where all the signs are not visible on the from-road. With the from-relation you might specify, which destination_sign=* should be used. --aleene (talk) 13:01, 3 August 2016 (UTC)
I would also like clarity around this. One relation per physical sign (could be one relation per destination depending on implementation) on a signpost is cumbersome but probably results in the most usable data. Would be great to have the main page updated to reflect common usage. In Ireland, we have a lot of signposts like this: 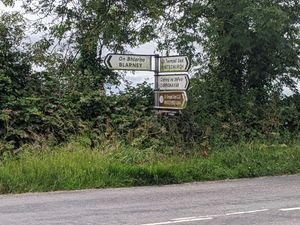 Let's add a member with "destination" role, that points to the destination place. That allows to find easy not only a turn to road, but also a destination.

I often map guideposts which point to more than one route to the same destination (example: "summer path" and "winter path"), each route having a different time and distance. Is it correct to add ruote information to the text of the member with role "destination"? --Kaitu 21:17, 9 January 2012 (UTC)

It would be great to add a tag for often used colour schemes, like motorways or rural roads. Every country use fixed schemes for their signs so it is dispensable to define every colour again and again. The routing software has to save a predefined set of country specific schemes and apply it, when a suitable tag is found.

Maybe we can introduce a tag like scheme=*. The value should be a combined string of 2 letter country code, e.g. DE for Germany, and the type of highway or a common description. So the tag scheme=DE_motorway (German motorway) implicit blue background, white text and white arrows for this relation.

I think the choice of tags colour:back, colour:text and colour:arrow are not ideal. It feels like the wrong type of information. It is not the colour that matters but the type of sign. E.g. a destination sign using a Motorway, primary road, cycleway, walkway, or what ever else the different colours are proxies for. -- Amm 12:44, 02 March 2010 (UTC)

In my opinion we need both information: the colors AND the type of sign. Why? Because if we only have the sign, the renderer needs the information how to display this sign for an endless number of different signs (unrealistic). And if we only have the colors and this colors change for a specific sign, all the relations have to be updated manually. If we instead know that these are specific signs, those color-updates can be automated. --Imagic 12:57, 18 January 2012 (UTC)

Is there any more guidance on this? My understanding right now is that information=guidepost should be used for the actual vertical post and Relation:destination_sign for the destinations on the signs. Is that accurate? Dónal (talk) 14:53, 17 July 2020 (UTC)

I vote for using "destination:ref" instead of "ref". "ref" gives the reference number of a street and not the destination information. Using "ref" means that it's meaning is context sensitive which makes it more complicated for software (and pepole too). So it seems easier and more clear to use "destination:ref". --WanMil (talk) 13:42, 14 December 2013 (UTC)

Hi WanMil, thanks for your comment. When following your opinion, "ref" would be reserved e.g. for some kind of reference number for the sign itself. I know places where even trees have official numbers, so it's quite probable that somebody also numbers signs, maybe on the back or on the pole. So, this probably makes sense.
However, do you think that the tags "distance" and "time" have been chosen correctly? After all, these are not properties of a sign object but rather properties of a destination object ("destination:distance" = distance to destination, and "destination:time" = time to destination). --Biff (talk) 01:10, 15 December 2013 (UTC)

Will it ever work according to the instruction?

I am wondering about if the relation would work as intended if a navigation software developer is following the instruction in the last part of the page. It states that the software should look for routes that are passing through first the sign node and then the intersection node, and then show the destination value. But let's say for example that the intersection node is a motorway exit; then the route would pass the intersection node regardless of whether it takes the exit or stays on the motorway. Subsequently, it would be impossible for the software to know which sign that should be shown. Would it not be necessary for the route to pass the sign node and the to way/node?Cmbengtsson (talk) 19:45, 7 November 2014 (UTC)

'via' as a valid role member

Taginfo has shown that the 'via' role is fairly widespread on ways (but not nodes) for this relation type. Using this makes a certain amount of sense, in instances where a way rather than a node is used to express the member between a from and a to member. The 'via' role is already used in turn restriction relations for this exact reason, and is probably why we see hundreds of uses of it appearing organically in destination_sign relations.

This brings up two questions:

1. Should via be a valid member relation type? My vote would be 'yes', for circumstances in which a way is the best choice between a destination_sign 'from' and 'to' member.

2. If (1) is yes, should we in the long term consider 'via' to be the only valid member, deprecating 'intersection'? Done in this manner, whether a node or a way, a 'via' role still universally applies to both. It would leave the valid members as 'from' 'to' 'via' 'sign'. It also would make future editing of these relations by software easier to code.

@Skybunny and Aharvey: I also disagree with the statement on this page that

via nodes are nonsensical. If they're nonsensical on nodes, why did the type=destination_sign tagging scheme adopt the same

to scheme as other relation types that do expect

What's the right way to map signs like this? They have the all of the roads's signed destinations and the distances to them, and are usually posted after major intersections or leaving towns, and generally feature more destinations than those posted in advance of an intersection. What's the proper way to map these? Just put a pseudo-intersection at the location of the sign and map the relation(s) as anywhere else, or is there another trick to it?

Additionally, this article talks about whether to use destination tags on ways, or this relation, but is it possible to use both, or does that break things?

I create a "information:guidepost", which I place on a node of the way. I add the "direction" keyword to indicate, from which direction of the road the sign is visible. Then I can add the destination signs to the guidepost. Indeed I need to create a pseudo-intersection on the node of the guidepost, to indicate that the node must also be viewed as the intersection. And the road must be cut on the node as well, in order to have a before and after the guidepost road-section. On the after section I can then add the destination sign as a relation with the 'to' markup.

Multiple distance and time values in one relation

Gaps in the relation

From the members table, a "to" role can be "A way/node (typically but not necessarily the first one) on the way after the junction." There is similar language for the "from" role.

Is this correct, or am I not understanding the text properly?

This sounds right - the ways that form the junction are neither 'from' nor 'to'. You can (and for completness should) add the roundabout in the 'intersection' role --Mueschel (talk) 18:48, 19 June 2019 (UTC)

This needs to be addressed on the main page. Looks like the role via maybe used? However there are a number of possible 'from' roles. It would be better if the roundabout could use the 'from' role. A the moment the tag is not really usable where roundabouts occur! The propsal did not consider runabouts at all. Warin61 (talk) 22:32, 29 March 2020 (UTC)

In this changeset, the idea was introduced to add "amenity" keys to signs that point towards the particular amenity, as in type=destination_sign + amenity=hospital. This idea was discussed critically on the tagging list in Oct 2019.--Polarbear w (talk) 18:28, 28 October 2019 (UTC)

for me, this use of destination:lang:XX is perfectly fine. I also used it in several places already. What is in the "destination" tag should follow local rules. Some communities agreed to have both languages in the main tag (and the two or more destinaton:lang:XX in addition). --Mueschel (talk) 23:33, 3 February 2022 (UTC)

That's what I was thinking. Thank you for clarifying and for the additional info! Baconcrisp