My suggestion is that if the entrances to different stores can be identified with nodes, these should be used to designate the stores in a mall. See Tag:building=entrance. An example of use → http://www.openstreetmap.org/browse/node/547501231 (though not strictly a mall, rather a multi-resident building). --Ceyockey 15:00, 31 October 2009 (UTC)

Many malls will have dozens if not hundreds of shops, so clearly you would not map these as a single object with many different tags. So for mapping the individual shops... I'd suggest shop=mall around the whole area (perhaps on the same area

as a building=yes) and then individual shops within the area, either as nodes, or as areas themselves. Clearly this presents a tough level of detail to go for, when there are many shops (see following) -- Harry Wood 11:06, 23 November 2010 (UTC)

FWIW, it seems simpler and distinct to area the whole building, and then use points for the individual stores. I wonder about strip malls, though. I'm seeing some in my home area where each individual store front is being area'd as an individual building. Technically though they are part of one building -- when necessary, spaces can be combined, split, resized. I prefer the same model: one big area for the building, and points for the shops. One benefit of this model over tagging the shops is that the points can be placed where the shops are located. - KTyler 23:14, 29 May 2012 (BST)

Mapping many shops on multi-levels 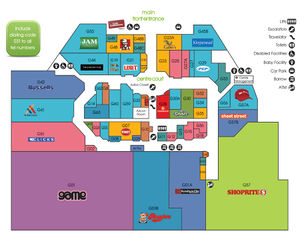 Can/should OSM data support the use case of creating store locator maps like this?

Recording the names of lots of shops inside a shopping mall, could keep mappers busy for a while! but could be worth doing. Think about mobile apps like basic "find my nearest macdonalds" or even special mall navigation apps. It's an improved level of detail we can try to work towards. But it gets particularly tricky when we start trying to do this for multi-level malls, where the shops are positioned above and below eachother. We need to flesh out the "How to map" section with some details of a recommended approach for this -- Harry Wood 11:06, 23 November 2010 (UTC)

I came across Indoor Mapping and Indoor/use cases#Shopping Centers which has some example store plan images like the one on the right. Maybe that page is good place to have a generic discussion about indoor mapping challenges.
We had a mapping party to map the massive new Stratford shopping mall near the olmypics site in London (map). This data is probably not a great example because three or four different people have input data in three or four different styles! This is multilevel including open air "streets" of shops on the top level above indoor corridors of shops below, but not following the same path. Tricky thing to try to map!
-- Harry Wood 16:47, 28 April 2012 (BST)

How about (Victorian) shopping arcades? Are they malls? Cardiff has several – Morgan Arcade, Royal Arcade etc. – that are not on the map yet. Here are a few that are on the map:

Or even shopping mill - there's quite a few mills that have been converted into shops. As they contain multiple stores IMHO mall is the best tag for it unless we want to create a separate tag for them.--Pobice 18:07, 8 November 2010 (UTC)

Theme of a mall

Pantip plaza in Bangkok is a mall that is exclusively dedicated to computer stores, right next to it, Platinum fashion mall does only have clothes shops. How could one tag this?

Underground malls are often mapped with location=underground and layer=-1 and more negative values can be used for the underground levels of features within the mall.

But how should we specify the location of an entrance to the underground mall?

There is an amenity=parking_entrance tag for the entrance of an underground (or aboveground) parking structure, which allows routing and rendering applications to show this location specifically.

It could be useful to map the location of the mall entrances, both for underground malls and large above-ground malls, so that the main mall entrances can be located separately from all the individual shop entrances. The tag indoor=yes can be used with entrance=yes to show that this door is within the mall, but there isn't a specific way to show the main entrance/exit from the whole shopping centre.

I think the tag should be used on the larger shopping center retail area where it's a shopping center instead of on a specific building. As a shopping center isn't a specific building. It's the whole area of the shopping center. Currently, a lot of times when shop=mall is tagged on a single large building it then excludes other non-attached buildings that are still technically part of the shopping center. It also makes it impossible to split the shops into smaller individual buildings. Which is really what they are. A bunch of smaller buildings that happen to share walls, but often have different addresses and are otherwise completely independent from each other. Its also weird tagging to tag a building as a shop, while then tagging the actual shop inside of the building area as a shop. It's not the overall larger building that's the shop. It's the specific shop building that is. It makes more sense add shop to the retail area like you would for a marketplace IMHO. --Adamant1 (talk) 22:33, 5 September 2019 (UTC)

KDW is not a mall

Hi, Tag:shop=mall#Pictures currently shows the Kaufhaus des Westens (KaDeWe) in Berlin. As even the name makes clear, that is not actually a mall but a department store and it is tagged such: [1]. --Oreg2 (talk) 08:33, 10 June 2021 (UTC)