From OpenStreetMap Wiki
< User:Ojw
Jump to navigation Jump to search

In Vienna. Previous: Girona. Next: TBA 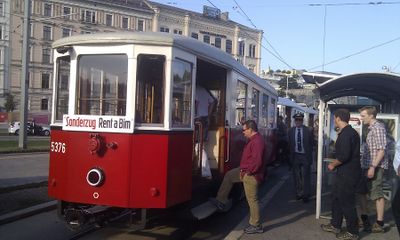 Getting around the city in style

Social networks like Twitter not much used, rweait suggests rota of people to reply to @openstreetmap messages.

OWL can do watchlist notifications

http://map.umt.edu/ showing road junction/pedestrian crossing layouts and deriving road centrelines from that. (but we know the real centrelines at junctions, and they can differ from centre of road area, so probably need to map anyway like we do with river centrelines)

Maps customised to match corporate websites - not really used much.

→ Easy recolouring of maps without rerender

Bing has a "streetside" view (but probably doesn't work because silverlight)

AIFDR where DR is disaster reduction, i.e. pre-mapping risky areas so that data is available immediately if something goes bad

http://publiclaboratory.org/ (don't mistype that one!)

Use of kites and ballons. OpenAerialMap

"Tasking server" to coordinate intensive mapping where people can "lock" or reserve areas of the map that they're editing. (aside: Maybe useful for organising mapping parties which have similar "cake diagrams")

Names of roads get done by expats for Haiti. (but this never got done in Baghdad, right?)

Declared their idea of workshare as "Bing does images, OSM does vectors", presumably then using OSM vectors as their map.

GMM has standard process of

which is more consistant than the potlatch way of drawing

P2 is about halfway down the line in discoverability-power continuum

Symbols better than text in editor-dialogs, because of i18n. Symbols in editor need to match symbols in chart.

Got 500m resolution dataset for depths by special agreement with (who?). But only for areas with depths > 20m, so need littoral areas to be mapped by crowdsourcing

Wants either plugin to existing GPS & depth-sounders carried on boats, or new cheap gadget (from hardware hacking community) that can log depths. Wants much better position accuracy than GPS modules are claiming.

Custom editors on other websites. e.g. http://wanderreitkarte.de/ and MapQuest Open

Exports data file saying what was written to image, e.g. bounding-boxes for text, or lines and points (for HTML imagemaps)

Another similar project is grid renderer, which exports per-pixel metadata about Mapnik images

My thoughts: Would be nice if Mapnik could read its own metadata output, so a base-layer renderer generates list of rectangles where it has placed text, and a set of overlay renderers try to arrange features into positions that don't conflict with the basemap.

Can display image-tile underlays. Loads osm.bz2. Can load custom DEM files. Rendering from database is too slow for interactive mode, so load all daa to memory.

RaphaelJS (is this similar to JSON export?) 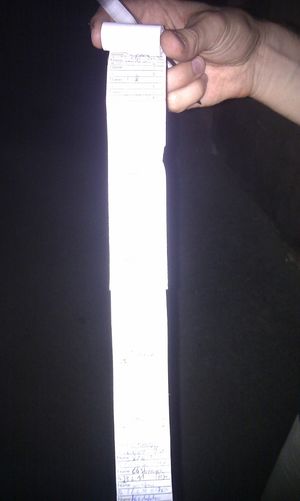 We found a geocache near the restaurant

Header-only library, so dependancies are only used if used.

Can embed the Google G8 javascript engine, to allow writing callbacks in JS

3 lines JS to init. Map.featureCollection is where to add stuff.

Requires scrollwheel or iPhone to zoom, doesn't work on Android

Extensive use of GeoJSON

No popups yet (GSoC planned)

Quality of solution depends on GPS position for nearby objects, and on compass for far objects.

http://code.google.com/p/osm-bundler was considered too difficult to use, got replaced

Allows clicking on objects in OSM data and getting full pages of textual information, e.g. wikipedia 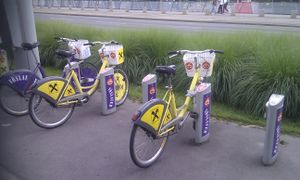 €1 per trip. Backpedal to brake.

OSM data is too detailed to get railway networks - need simplified routes linking stations (like we do for river centrelines). But doesn't want to just put this in OSM in case people edit ("the node would be in middle of nowhere with no apparent reason to exist")

Good plot of angle vs distance for OSM nodes in a way - clearly shows straight/curve sections, with "noise" due to precise node positioning. Simplifying that graph and integrating back to get positions allows creating long sections which approximately match the route. (100m worst case)

Aside: bridges cause railways to shift sideways, as bridge is built first, then existing railway rerouted over new bridge

Wheelchair map has list of 40K points accessible=yes/no/maybe that they would like to use in OSM but without import.

My idea: generate tilemap with red/green blobs that Potlatch users can look at while mapping, to see if the feature they're editing should have a wheelchair tag.

Idea to put OSM data into Google maps. Apparently new license will allow it (so we don't get much say, surely - why bother voting?) 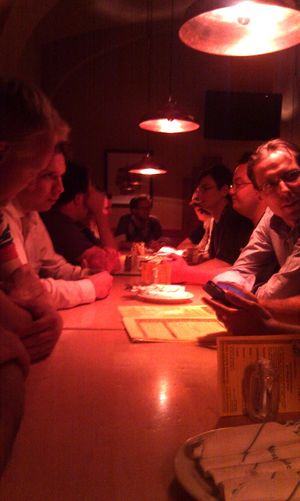 Quote: "we could get rid of half of all tags without even thiking about it" (i.e. misspelled ones)

Would be good to use TagWatch as editor plugin, e.g. "this tag isn't used much, are you sure you didn't misspell it?"

Suggestion to generate road-length statistics, for purposes of comparison with commercial databases. Problem since osmium throws-away lat/lon very early in process to save on temporary-storage.

Need high-contrast rendering for reading printed maps in early morning (maps for people who didn't get coffee yet?)

Use Buffer(10, Buffer(-10)) in Mapnik SQL statements to simplify buildings

Bus stop areas for label-placement (lots of objects with same name, only need one text label)

Special-variables !bbox! and similar one for zoom, can be useful in tile-generation and getting data from APIs

Discussion on feature placement depending on how dense they are (i.e. automated solution to Proposed features/Pub location)

General algorithm is "zoom out until 200,000 population is in view", to give proper balance between urban areas needing high zoom and rural areas lowzoom

SEDAC is the gridded population-density dataset that can be useful in some countries. Arkward to calculate around coastlines.

Used in GroupsNearYou (a CL project)

Project of the week

Project should be like detailed tutorials on mapping a feature step-by-step. Lots of essay-style work.