The language of Cambodia is Khmer. All names in this county should be in Khmer Writing!!

There are missing residential roads on the outskirts of Phnom Penh, Siem Reap, Battambang.

To write Khmer with a computer also for Khmer people is not easy, but many Khmer are not able to read English. The Khmer Alphabet has about 72 Characters and same sounds of Khmer simple don't exist in English.

There are many Cambodia maps with English writing available. For Children in School, there is no map in Khmer. There are many Children in _Cambodia that are not able to read, even if they go to school. A reason for that is, that they simply have nothing to read.

--- UPDATES: As of 15 May 2019, official administrative location names can be found on: http://db.ncdd.gov.kh/gazetteer/view/index.castle ---

Roads referenced with number 1 to 11 are National Highways (Khmer: ផ្លូវជាតិ). They form the backbone of the national road network and should be tagged with highway=trunk + ref=#.

The roads referenced 12 to 142 are the roads forming the backbone of regional road networks. They should be tagged with highway=primary + ref=##.

Wikimedia Commons has a large map of Cambodia in two forms: one with legend and placenames in English and another in Khmer. Apart from the text, the maps are identical. 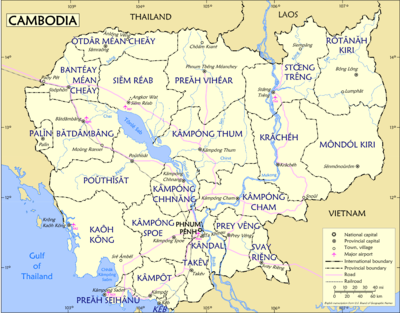 There are multiple transliterations of Khmer placenames into English. One thing that's needed is a table showing Khmer names with the corresponding English names used. -- Rsperberg 04:47, 30 July 2011 (BST)

--វ័ណថារិទ្ធ 17:05, 4 July 2009 (UTC) A local Cambodian living in Phnom Penh, who is very happy to help with typing in Khmer Unicode and other stuffs. 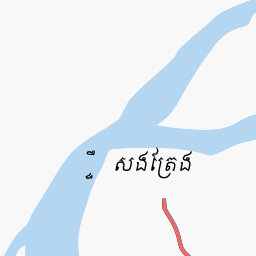 UPDATES: As of 15 May 2019, there is no more rendering issue with Khmer fonts on OSM.

Data downloads in different formats are available from Geofabrik website. Data are updated every day.