The goal of this sub-project is to improve the address coverage in Luxembourg. Having all addresses in OpenStreetMap would greatly improve routing, a functionality used by many people to navigate from point A to point B, as the routing could be done door-to-door instead of street-to-street.

This page aims to describe how addresses are mapped in Luxembourg.

While there are multiple ways of mapping addresses in OpenStreetMap, we use the Karlsruhe Schema. This address schema does not rely on relations and is therefore easier to understand for beginners.

it is very important that the name=* on the highway (street) matches the addr:street=* on the building address!

Note that the street name should follow the following conventions:

The following tags are used to map streets:

You can map the address on the building itself (closed way), or as a node on top of the building.

Note that the house number should follow the following conventions:

Addresses should be tagged according to the following schema (Karlsruhe Schema):

While you can use iD, using JOSM is generally quicker once you get used to it.

If you decide to use JOSM, the recommended plugins are:

Ideally, the building outlines should be drawn before adding the addresses. To do this, follow the following recommendations:

The goal of surveying an area is to collect the street names and house numbers. While you can use a Smartphone to directly write the data into OpenStreetMap, you can also use Field Papers to print out a paper map, write down the street names and addresses and upload the resulting map by taking a picture.This picture can then be imported into JOSM and published online for others to use.

Post codes are harder to survey, as they aren't written on any sign. Furthermore, post codes in Luxembourg are usually attributed by street, i.e. for a given street, most (if not all) houses will have the same post code.

To do: Explain CACLR etc.

Alternatively, you can use the CACLR dataset as a reference in order to collect the data required to map the addresses into OpenStreetMap.

Step 4: Adding the house numbers to your buildings

To do: Rework this step!

When you are done, the terracer-plugin comes into action.
For single houses, just select the house and call the plugin with <shift>+<t>.
Insert the housenumber as lowest housenumber and as highest housenumber. For terraces, insert the lowest and the highest housenumbers.
The plugin will detect the number of the houses. It will then segment the building outline into single outlines for each house.
If the housenumbers are the wrong way, a <shift>+<r> will reverse the numbers in the selected terrace.
The option "Umringslinie löschen" (delete building outline ?) should be checked, to delete the original outline, you drew in the first step.

Select a street name before pressing ok, the addr:street tag will be placed for each single house.

You are almost done by now! Repeat for the next house, the next street, the next village, the next commune, the next canton, the next district, and then the entire country.

Why don't we use interpolation?

As there is a dataset containing all house numbers for Luxembourg, we don’t use interpolation for mapping addresses.

I have used the following codes for the images below: 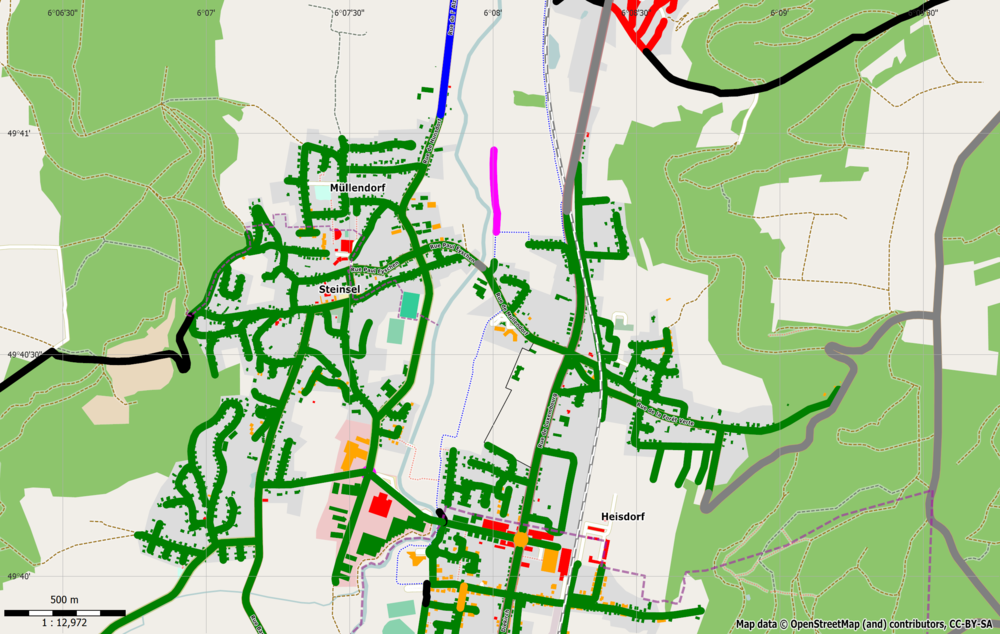 Streets/Buildings Status of Steinsel - Click on the image to enlarge

Streets/Buildings Status of Walferdange - Click on the image to enlarge
Retrieved from "https://wiki.openstreetmap.org/w/index.php?title=WikiProject_Luxembourg/Addresses&oldid=1671668"
Category: