Over the past year, the Medical Stores Department (MSD) (which is a parastatal organization) and JSI staff collected GPS data (from now on we will call it MSD&JSI data) from medical supply delivery vehicles across Tanzania, and processed that into OSM road network improvements. The data was worked on externally in ArcGIS and QGIS, so there's a need for an import process to get this comprehensive road data into OSM. Additional data was generated using Bing aerial imagery.

The original file is in shapefile format, and consists of about 60,000 km of detailed additional road data across Mainland Tanzania based on GPS data and Bing imagery. The Medical Stores Department (MSD) gave recently permission to JSI to upload this data on to OSM, as the data was gained from GPS devices on their vehicles.

For the time being, only segments that are new to OSM will be imported, except when MSD&JSI segments are a clear improvement of poor OSM ways. Some cases of this are: an OSM road traced using low resolution aerial imagery (Landsat...), an OSM road traced with cloudy imagery, OSM roads that are the result of a poor quality former road import (Africover...), etc. In these cases the MSD&JSI roads will replace these wrong OSM segments and hence improve the OSM database.

Although quite rare, we can find a MSD&JSI segment that is incomplete, like the one in the next image, where we can see the upper way not finished in its West side. In this case, if the not-finished part is not too long, we will finish that segment using aerial imagery (Bing or Mapbox). 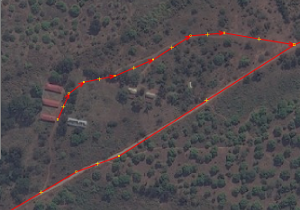 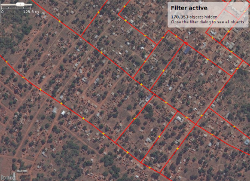 Very rarely, we may find a MSD&JSI road that looks not to exist, like the one we show in the next image. In this screenshot, we have the MSD&JSI way in red, and in blue we painted a road that goes nearby, but not traceable for the whole length of the JSI road. In this case, we will skip importing this road, and report it to the JSI staff, so they can check it again. In any case, this issue is extremely rare. 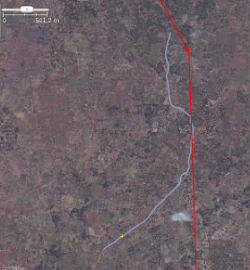 Data license: You can see a scan of the license here

The best approach to import this data is manually though several HOT Tasking Manager projects. Advantages:

We need to split the file in several chunks/areas (around 4 or 5 in total), as retrieving the data for each task would take too long if we used only one file. Each piece will make one project in the Tasking Manager, and we can publish new projects progressively, as the previous jobs are being finished.

During the import, as we explained before, those MSD&JSI segments that have an equivalent OSM way of equivalent or better quality, won't be imported. So we will delete those segments beforehand, therefore making the import faster and easier.

Apart from that, all MSD&JSI roads will be simplified in their number of nodes by around 50%. This will be done also before the import process starts, using JOSM Simplify Way tool.

Every MSD&JSI segment comes with 19 tags. Of those, the only one that could be of use would be the Road_type=* tag. This tag has 4 values:

So it's clearly impossible to automatically translate these tags into the OSM tagging schema. We will instead follow the Highway Tag Africa wiki for road tagging as reference.

We propose the following base tagging (that means, the tags all users will get for all MSD&JSI segments that they have to manually modify when needed):

You can download a sample of the data (about 20% of the total) from here (it corresponds to SE Tanzania). For that same sample file, you can check here the resulting file.

This import (data integration) will be done through the HOT Tasking Manager, so the number of people importing the data is unknown. We don't expect a big number of users, as we require them to be experienced mappers. Among the skills required:

With the inputs from those lists, we will open a thread in the imports list.

We will use JOSM editor for this import.

There are several ways to reach the same results. We have tried to find the simplest one, the less error-prone and the one that assures a higher level of consistency across different import volunteers. The proposed workflow is as follows: