5 March 2021: I started this page as a way to document and track river and stream cleanup in the United States. My edits using this procedure in the US are discussed with local mapping communities as required by the Automated Edits code of conduct. Mappers in other countries have found this procedure useful and have since expanded the page to track areas outside of the United States. I welcome this collaboration. If it is useful to you, feel free to use the "progress" section to track progress in other places. If there is an issue with a particular changeset associated with this procedure, please comment on the problem changeset, and discuss the issue with the mapper that created it.

The River Modernization Project aims to track and modernize river tagging worldwide while fixing geometry and tagging errors on rivers and streams. There are many issues such as overlapping water areas, mis-tagged tunnels and culverts, node/way duplication, legacy tagging schemes, and common tagging errors, which can be quickly identified and fixed via the JOSM validator using sparse-editing techniques. In addition to fixes to the map, this project's focus on river and stream tagging specifically has led to the identification of 11 bugs in JOSM and its validator of which 6 have been fixed so far.

Please be aware of the Automated Edits code of conduct; large-scale edits should only be done with the consent of local mapping communities.

The earliest OpenStreetMap tagging schemes for rivers had two tags: waterway=river for the tagging ways representing the path of the river, and later waterway=riverbank, which was used to tag the banks (edges) of the river. This tagging system evolved over time, and mappers began connecting the two riverbanks into closed polygons, and today waterway=riverbank is used to tag the areas of rivers. This evolution resulted in a confusing situation in which the riverbank tag was really used for the river area.

In 2011, the proposal water details was approved, creating the water=* key, which provided additional detail to areas tagged natural=water. That proposal approved the new tag water=river (+natural=water) as a wholesale replacement for the older waterway=riverbank. However, since water=* was brand new, the proposal recommended dual tagging for a period of time in order to allow data consumers and renderers to catch up.

Over time, water=* became increasingly popular and by mid-2016, mappers began consistently favoring the use of water=* over older schemes.

On December 11, 2018, a new issue was opened in the iD editor's issue tracker to change that editor's presets to use the water=* scheme rather than competing alternatives. This change took effect with version 2.13.0, released Jan 23, 2019. A few months after this iD editor preset change, mappers began consistently favoring the use of water=* in much larger numbers.

In the 10 years that has passed since water=* was approved, natural=water has become universally accepted by data consumers and map renders. In order to standardize water feature tagging across the database, and maintain alignment with the standard iD editor, the following procedures are provided as a guide to mappers wishing to modernize river tagging in their area.

This page documents the process of modernizing river tagging, resulting in river areas passing all JOSM validator checks and tagged with natural=water + water=river instead of waterway=riverbank.

Step 0: Ensure that you have the support of the local mapping community

Also, it is recommended to upload changesets periodically for a large modernization job.

I'm working on a project that aims at improving the river data in OSM. The main aim of the project is fixing various issues like duplicated nodes, overlapping water areas, crossing ways, and using the newer natural=water + water=river scheme instead of the older waterway=riverbank. Would you support such a project in order to fix geometry errors and update tagging on <location>'s rivers? You can learn more about this project and what exactly is being done here. Let me know if you have any questions.

The purpose of this step is to fix tagging on river water areas that are tagged natural=water but are missing the water=river tag.

It is recommended that this step be done with the Carto "Black and White" imagery set. The query below is used to load water data into JOSM using the "Download from Overpass API" option. The "geocodeArea" option can be changed to whichever area is being worked on. This can be a state, county, etc., as needed.

Alternately, use a bounding box:

Once these are downloaded, you will probably have to filter out many smaller objects to "see" likely river objects. Press Ctrl + F and search for something like natural=water areasize:-5000. This will search for small objects in the downloaded data set. Once this selection is made, be sure to add the members of selected relations to the selection (select selected relations, right-click, "Select members (add)"). Press Ctrl + Shift + P to purge these objects from the editor. Repeat this process, each time increasing the areasize parameter until the smaller objects have been purged and just rivers are remaining.

Once you've purged out the minor water features, tag the remaining natural=water objects with the missing water=* tags, such as water=river, water=stream, water=reservoir, water=lake, etc as appropriate. Be sure to upload your changes!

Once you've completed the tagging of these water areas, press Ctrl + F4 to purge this layer. Be sure to leave enough time for Overpass to updates (i.e. at least 5 minutes) before starting the next section.

Next, change the query to download all river features, and upload

Alternately, use a bounding box:

Visually scan for canals mis-tagged as rivers. They are usually identifiable by their geometric, rather than natural shapes. However, note that some diverted rivers may match this description. Such canals may appear in large clusters in agricultural regions. Canal water areas should be tagged natural=water + water=canal.

Run the JOSM validator and fix all errors. Common errors include:

There may be rivers which have conflicting tagging which would prevent automatic conversion. 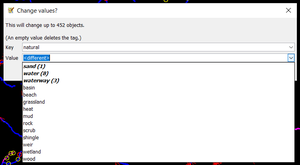 Below are JOSM bugs that were discovered and reported as part of this project:

Note: this section is a collaboration of mappers working worldwide.

Use this Overpass query to enumerate the number of OSM elements with the waterway=riverbank tag:

14 June 2022: Annotated pie chart which compares each country's share of waterway=riverbank tags on a global scale. Countries with less than 100 instances of the tag are not labeled. 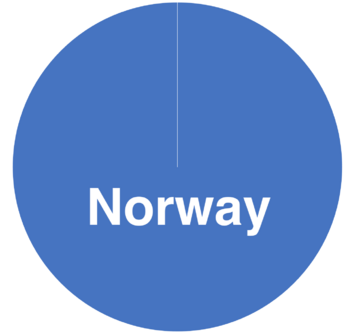 Map which color-codes OSM river modernization progress based on prevalence of waterway=riverbank and water=river tags.

14 June 2022: Color-coded world map which categorizes countries and autonomous territories based on the amount of deprecated waterway=riverbank tags they possess. This map was featured in weeklyOSM #585.

Map which color-codes OSM river modernization progress based on volume of waterway=riverbank tags. 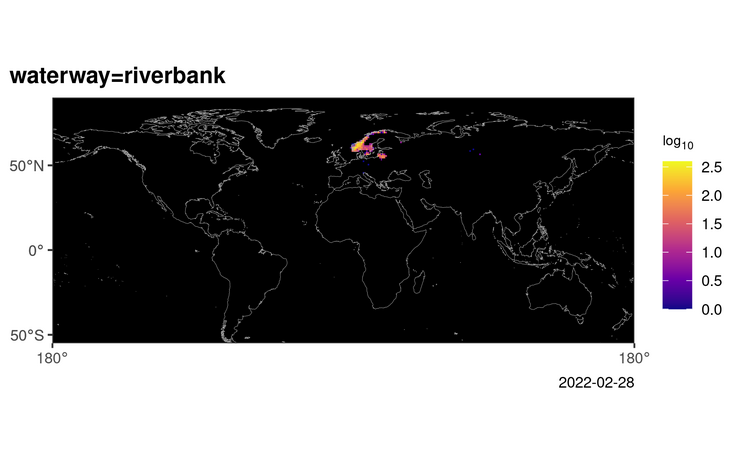 Some areas may have additional river-related issues that need cleaned up, or are indicated as a problem when discussing river modernization with the local community. They are discussed in the section below.

As of 2021-11-04, over 44,600 water=river areas and 8,500 waterway=riverbank areas are combined with a name=* tag. To prevent duplication of names and to comply with the One feature, one OSM element policy, it is desirable to remove the names from these river areas. When doing this, it is highly recommended to check whether a waterway=river

way is present, otherwise the name of the river may accidentally be lost. Also keep in mind that some river areas are actually incorrectly tagged canals, which need to be retagged accordingly.

The following Overpass query can be used to find named river areas:

Waterway objects (waterway=river and waterway=stream) should not cross a road without some indication of crossing type, such as a tunnel, bridge, or culvert. In addition, the layer=* tag should be set on either the road or waterway to indicate grade separation.

First, use an overpass query like the one here to identify these crossings:

Run the validator and look for the warning "crossing highway/waterway". If none are found, check your validator settings to ensure this warning is enabled.

As an initial step, run the following search in JOSM to add missing layer tags to bridges:

This will handle the case in which the bridge exists but no layer tagging has been set.

The remainder of the cases will likely need to be handled manually.

Discussion of River Modernization during the 2021 OSMF Election

This project was the subject of a community question to the OSMF board candidates during the 2021 OSMF election. Some of the comments from the candidates are excerpted below:

“I have taken part in this mapping project, and I support the river modernization approach. It's not a mechanical edit, merely a targeting mapping campaign by people who want to map rivers & waterbodies well in OSM. I've made some simple scripts to help. We need more of this kind of project in OSM.”

“One group wants to see the water tagged according to the (newer) 2011 proposal, and has reasons for wanting all the 'water' tags to work consistently. They follow a process, document their work, and engage with the local community before modifying the tags, and avoid editing in places where the local community doesn't want their help.”