For the fruit, see Tag:landuse=orchard. 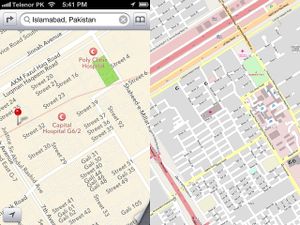 Apple Inc. is an American technology company known for its computers and mobile devices. A wide variety of OpenStreetMap-powered software is available for all four of Apple’s operating system platforms:

Use of OSM data

In March 2012, Apple made a foray into OpenStreetMap usage when it introduced a version of iPhoto that used OpenStreetMap-based map tiles. Since iOS 6, Apple’s Maps applications have used OpenStreetMap data in some regions where commercial data providers have less extensive coverage.

Apple's data team contributes to OpenStreetMap's coverage of a number of countries. The team's mapping projects are documented publicly in the Apple Data Projects repository on GitHub. They were added to the list of organised editing activities. A list of projects is also maintained here on the OSM wiki: Organised Editing/Activities/Apple.

Apple also created the Atlas tool for analyzing OpenStreetMap data. For example, Atlas Checks can be used to find potential OSM data issues, such as to create MapRoulette challenges.

Apple also contributes to OSM through other companies with no visible link to Apple: