Project Of The Week : Fire stations

How often do we walk past the fire station without giving it a second thought? Once in a while we might hear the sirens of the engines as they roll on a call. And we all pull over to let emergency vehicles pass.

The Project of the Week is to map your local fire station. 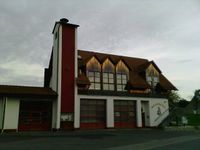 For those of you wondering when the Bing aerials were photographed for an area, Martijn van Exel has created a tool just for that.

As you browse the Bing imagery at various zoom levels and you will see the age of each tile.

To handle the naming of things in OSM, there is the name=* and to translate it, you can use name:fr=* or name:en=* or what-ever you language is.

But, as revealed in a mail, when you tag something with a name=* attribute and don't tag it has name:fr=* you leave tools with a hard thing to solve: what is the language of the "name" tag. This could lead to say to an English speaker thinking that Edinburgh is in Écosse and not in Scotland ( Scotland was tagged with name=Scotland name:fr=Ecosse but no name:en).

The suggested solution is to take a default language from the country, but what can we do with multilangage country or zone? Some people point out an early proposition to handle default values of tags (a bit like tag central but managed inside OSM)

Nominatim's ability to recognize special search phrases has been a little poor, but with your help, we can make this problem a thing of the past. A bunch of Special Phrases has been added and are awaiting translation.

Someone has proposed a new feature on the mailing list: Proposed features/Tree nursery. Quickly the author was invited to enhance a previously abandoned proposition of "Plant Nursery".

Comments are now open on the Tree nursery's talk page.

Someone didn't remember agreeing the new contributors terms. then he asked admins to unset his flag. A big debate started about whether we can unset the flag. While the author doesn't seems to have obtained what he asked, the discussion was moved onto the Licence mailing list.

Remember the previously proposed feature: Community Updates/2010-10-04#RFC: Winter Road? This is for roads that are only available in winter (goes on lakes, ... ) Since the comments of the community were quite negative about the proposed scheme, the author has made some corrections and come back with another try. See Proposed features/surface:winter road and give your advice in the Talk page.

As usual, Thanks to Pascal, Jonas , Dennis & Whiletrue.