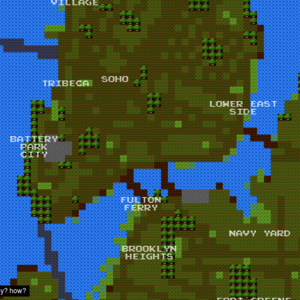 An 8bit-game-like map of New York City based on OSM data. http://8bitnyc.com/

Project of The Week : Crossroad Mapping 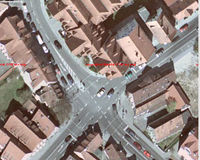 landuse=greenfield is described on the wiki as an area scheduled for new development where there have been no buildings before, and landuse=brownfield as land scheduled for new development where old buildings have been demolished and cleared. Differences are not clear for everyone and the use of landuse=greenfield is quite controversial. In fact some people thinks it'd be better to have nothing until the construction start and only then put a tag landuse=construction.

Traffic speed is a new proposed relation to store the average traffic speed on a road. This relation, could use time based values to describe the usual speed. An example would be "motorcar:forward=Mo-Fr 08:30-9:30 8mph"

Comments are welcome on the Talk Page

Some time ago, the new proposal about site or building registered by an official heritage organisation has popped out on the wiki, but was not advertised. Now it's done : Request are welcome on Talk:Proposed features/heritage. This new tag "heritage=*" aims to replace the previously proposed historic=heritage or the historic=unesco_world_heritage.

This week someone added, without consensus, a new tag to Map Features. In fact this tag is not a new tag and has been described a year from now. overtaking=* is in fact a way to tag a portion of a road where overtaking is allows or disallowed. Discussions on the lists started again about the utility of this tag and the way it was added to Map Features.

A new proposal has been made to handle "winter roads". These road are used only during the winter season, and are often completely impassable during warm season. They would be tagged as surface=winter_road.

TagInfo (taginfo.openstreetmap.de) has been announced on the mailing list. This new tool provide statistics about tag usage across the globe. It's built as another alternative to the older Tagwatch, Tagstat, and OSMdoc tools. How much is X or Y used?, what are different values for tag Z?, which wiki page describe tag W? For these kinds of questions check out TagInfo. It's open source and available on github.

Discussions about Land Use and Land coverage

Someone started a discussion about creating a "new" tag landcover=* that will solve problems of landuse=*. In Fact, "landuse" tags sometime describe a "use" (farm,...) of the land, and sometimes a "coverage" (forest,...). Some people want to use surface=* to do that job.

Thanks to Stephan75 for news hints on the Draft page.