From OpenStreetMap Wiki
Jump to navigation Jump to search
Key:side road - Other languages

Joined road (blue lines) has connection only to side road (Russian: карман, green line, mapped with side_road=rotary), there is no direct connection with main carriageways (red lines) 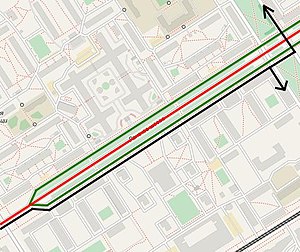 Key side_road (Russian: боковой проезд) is used for marking side carriageways of roads. Please, mention, that such essence can exists not in every town and not in every country!

In this description side road (Russian: боковой проезд) is an separate carriageway of road which usually, but not obligatory, is located laterally from main carriageway and has beginnigth after one crossing and end before next crossing. Principal difference from trafficway, which goes across adjoined territory (Russian: прилегающая территория) is acceptance of transit movement[1]. Side road can has both oneway and two-way direction. It can have traffic signs, restricted maximal speed, pedestrian crossing (Russian: пешеходный переход) and traffic lights. On the one hand, transit movement across side road is not restricted - so routing across side road by navigators is not contradicted with traffic rules[1]. On the other hand, for entering to side road driver, perhaps, it is necessary to do realignment, decreasing of speed, for returning to main carriageway - give a way to cars, going across main carriageway. So it recommended to avoid movement across side roads, if it is possible. Necessarity to distinguish side roads from main carriageways can happens, for example, when doing binding tracks to roads. To mark, that carriageway is such side road - pocket (Russian: боковой проезд - карман) add side_road=yes (if there are trafficways, connecting side_road with main carriageway), side_road=double (if side road is a full-fledged double for main carriageway) or side_road=rotary (if side road is used for turning to intersectable or adjoining road because turning from main carriageway is physically impossible or prohibited) additionally to tag highway=residential (for side roads, going near appartments) or highway=unclassified (for side roads, going near factories). Sometimes, we can't avoid using of side roads, because some of them are used for maneuvers, which are restricted at main carriageway. Roads, which joined only to side road, but no to main carriageway, can exist. In such cases status of side road can be any. (highway=tertiary, highway=secondary etc.). There different opinions about using tag name=* at side roads: some people think, that we can do it, some - that we can't do it.

It is useful to add additionally to side_road=yes, side_road=double or side_road=rotary some tags, describing the trafficway: width=*, lanes=*, surface=*, smoothness=*, surface:grade=*, maxspeed=*, maxspeed:practical=* at side roads, tags highway=give_way or highway=stop at points of joining to main carriageway, tag traffic_calming=* at nodes of location artificial unevennesses, tag highway=crossing - at nodes of pedestrian crossings (Russian: пешеходный переход), marked with traffic signs at side roads, tag highway=traffic_signals at nodes of location of traffic lights. Tag side_road doesn't establish automatically restrictions, it is used for marking carriageways, which are not central (onsetter): lateral ways (Russian: боковые проезды), side roads (Russian: карманы) and ways, which connect central carriageways with lateral carriageways.