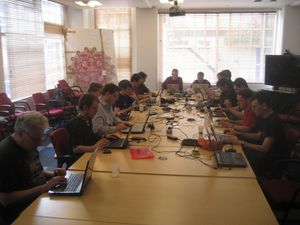 Thanks to AOL for providing a great venue, and Matt (who works there) for sorting this out, and generally doing the organising. The venue was two large meeting rooms in their London offices at 11-20 Capper Street (WC1E 6JA), near UCL, map.

Thanks to Andy Allan for running tutorial sessions (details below)

Add yourself here if you're planning to come:

Other names on the list who (I dont think) showed up

Things we hacked upon

What is this? Event format

An OpenStreetMap "hack weekend" is a meet-up where we bring along laptops to an office space and spend the weekend doing some technical work to improve OpenStreetMap. This may be development of the "core" components, the editors, or any other side projects and pet projects we fancy hacking on. OpenStreetMap has development tasks sprouting from it in all directions. There's work to do almost in any programming language, as well as tasks like documentation, and even some non-technical graphics design and translation tasks.

We mostly take a fairly unstructured free-form format. People turn up and start beavering away on something, or they turn up and see what they can help with. However...

This time around there is a plan to follow a workshop format for at least some of time. These are all hands-on, helping you not only learn about the topics, but get set-up with a development environment on your laptop. You can join in with the workshops, or hack on your own projects, or both.

Workshops will be run by Harry, Andy and other developers.

We have a few core developers who are without a doubt "experts" at various aspects of OpenStreetMap hacking. We've seen in the past, that when experts get together in a room for a weekend, great things happen. But it can leave some onlookers with the feeling that they should stay out of the way. We want people to come away from the event empowered with the knowledge and all set up to help with development going forwards. The aim is to try and sow a seed, even if it means less hacking will get done at the time.