This article or section may contain out-of-date information: Updates in the German language version of this page do not reflect in the English language version (the version that you're currently reading).
If you know about the current state of affairs, please help keep everyone informed by updating this information. (Discussion)

NOTE: As of 2021-03, openfiremap.org seems to redirect to openfiremap.de, which only covers Germany.

Goal of this project is to generate an optimized map based on OpenStreetMap. Fire stations, hydrants, water tanks, and ponds used for firefighting (suction points) should be shown highlighted.

Besides the online map an easy export for paper prints or for fast viewing on different media shall be made available. Also an export of fire hydrant positions as GPX file shall be created.

The map is usually updated every 2-3 days. Hence you can expect new edits to be displayed within about 1-5 days.

The community of Schnaittach (in Germany) and the surrounding area has complete coverage of fire hydrants and other fire-fighting sources. Thus, this area in OpenFireMap can be used as reference. 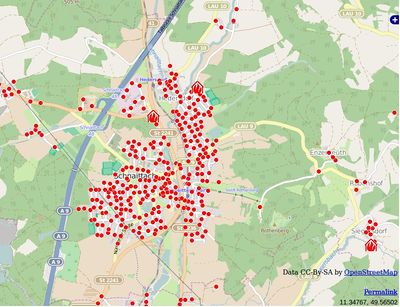 Location of fire hydrants in Schnaittach (as of August 2015)

A first version was created by T-i in September 2010. Based on the conversations at the Nürnberger Stammtisch it was initiated by Markus in a Zurich mapping party. The domain OpenFireMap.org until end of 2011 showed this map.

In December 2010, a worldwide fire station-related Project of the Week was conducted. Statistics about created objects can be found there.

In October 2011 the matter "firemap" was once again discusses at the OSM Stammtisch in Nürnberg. Alternative development is done by a small group since then. Based on Openptmap.org a new firemap layer was created. Since January 2012 the domain OpenFireMap.org points to there.

Presentation on the map 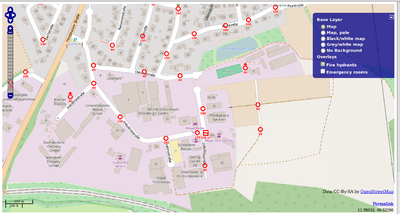 We didn't yet find an optimal solution for those zoom levels (so nothing is rendered yet). Possible display as transparent dots or code for clustering hydrants maybe is implemented later.

Where hydrants are already mapped

A list of hydrants added (in Germany) can be found here (in German).

You can find instructions for entering hydrants at the OpenFireMap HOWTO page. Many firefighters use that as practice: reading maps, find hydrants, check them, clean them - and add them into OSM. Great for apprentices. 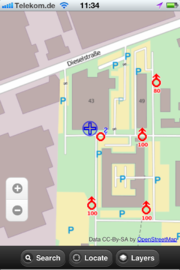 OpenFireMap.org as seen on a smartphone

There is a mobile version (Beta) for smartphones. The blue cross indicates the current location, while the blue circle shows its accuracy. It can be viewed at

Export to a different medium:

Printout for use in the field.

Printout for the fire station house.

PDF should be suitable for professional printing.

Graphics output for fast use if no online connection is available.

Select a region and export hydrant's locations into a GPX file.

Hydrants in zoom level 8 to 11

Clustering hydrants in lower zoom levels as in OpenGastroMap.org. -- Stephankn
So it is easier to check where hydrants are already mapped...

A transparent circle (= tube length) around each hydrant (starting at z=15) would be cool, standard radius 80m. With that it would be visible where additional hydrants are necessary.

This is the code for variable radius

In z=17 relevant POIs/areas should be clickable, showing a popup with all data from the DB. Gets complicated with a more complex data schema. You can see where data are missing.

If you have questions about OpenFireMap.org, please contact Wankmann or send an email to info (at) openfiremap.org.

Create your own Map

In case you want to create your own OpenFireMap or use it as a template for a new specialized map, please have a look at the OpenFireMap installation page.