Party render is a tool (a couple of python scripts) for rendering the GPS tracts from a mapping parties, as a static image or a video, with each individual mapper's trace shown in a different colour.

Party renderings became something of a ritual in the early days of OpenStreetMap. Mapping parties would always involve lots of intensive recording of GPS tracks, and getting together all of this data at the end of the day, was all part of the fun. 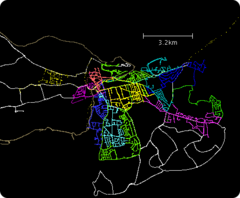 The basic ritual is to produce an image of all the tracks as follows:

The resulting image is like that shown on the right (Mapping party results).

Question is: could this be automated?

The answer: of course

Enter some scripts to do the dirty work:

Both scripts are available from the Subversion repository.

If the code in the SVN is not working try this one and is maintained by user:OJW.

Both scripts require the following:

Pymedia doesn't build on gcc-4 out of the box, here's how to fix it:

On Ubuntu the following will help get you started:

Also, see the note about including additional headers below. This is necessary at least for Ubuntu 12.04.

To get this working on OpenSUSE, follow these steps:

(latter is needed to compile pymedia)

Place your GPX files under a directory, and run:

You will probably want to tweak some parameters, such as the map area shown in the render.

Try the option -g none. Downloading the gazetteer can fail when XAPI is down or giving bogus responses, or maybe the request simply timed out. This option tells party render not to use a gazetteer and avoids downloading it.

Alternatively, you can try downloading a gazetteer yourself then passing the file to party render:

Source code is in Python, and located in SVN with history

Naively, you might think you could take the extents of the trackpoints and use those to scale the map. Doesn't work - nearly everyone has erroneous points from middle of the atlantic, or from their home town 100 miles away.

Theoretically, the best algorithm to scale the map would be Median absolute deviation, since you can ask it for the middle 90% (say) of points and ignore outliers completely. However, I've had some trouble getting MAD to work on 200,000+ points (The O(n) algorithm uses quicksort and uses too much memory/recursion depth. Other algorithms are just very slow)

(note: on my tests, the "real map" only covers about 0.1 standard deviations, so SD doesn't look like a very good measure either)

So the current version just asks for how many kilometres you want, and centres the map on the average (mean) position of trackpoints. But we should try and find a better way of doing it from the tracklogs themselves.

For an example animation, see the Surrey Mapping Party on YouTube.

TODO: Many of the abpve example links were on blip.tv which seems to be shut down. But do these videos still exist anywhere?