This is a community-led mapping effort to to augment available open geodata for affected areas for use during disaster response, damage assessment, and future spatial analysis.

Typhoon Ompong, approaching the Philippineas , as seen from satellite from Sep 7-12.

The first task job was published and shared to the mapping community in 13th September. The following tasks cover the areas to be mapped affected by Ompong.

Parts of Ilocos Region were also hit but already has base data, created from a pilot project led by UP Resilience Institute, (then an ad-hoc group under DOST, and previously known as Project NOAH) to map select provinces in the Philippines.

Imagery and Other data sources

There are some discussions about utilizing ML-generated priority areas, to assist mappers in identifying places to map, but no specific action has been made.

The tasks are open to beginners and volunteers new to mapping in OpenStreetMap, who are instructed to prioritize the mapping of building structures. All other features are considered secondary, but tagging settlements and digitizing the roads that connect them to the rest of the highway network are strongly encouraged.

This effort is led by several advocates from several technical communities, and the co-ordination process was largely made through a local community Telegram channel: OSMph LoCo. Mapping efforts are made remotely, and a few mapathons. 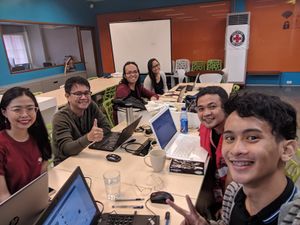 Some photos taken during the various mapping marathons help for #ompongPH mapping efforts.