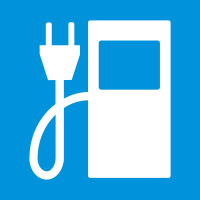 Charging stations supply energy for electric vehicles, like gas stations do for conventional vehicles. There are some different types of charging stations. E-Bikes e.g. can be charged at an domestic wall socket.

Very useful for navigating on an E-Bike, E-Scooter, Segway or electric car.

If there are many charging stations at one single place, they can be combined into a single charging place using a Charging place relation.

This proposal will deprecate:

Charging stations will no longer be tagged as

(but this tag is not deprecated, of course, because it is still used for liquid fuels.)

There are some charging stations which have several different sockets. Therefore it is necessary to have the possibility to enter the count for every type of socket.

There may be sockets of which the voltage and the current is not tightly defined by the technical standard (blue CEE for example can have 200V to 250V) or which can be fused at different currents. It is possible to provide additional information about this.

Please discuss values for these sockets on the discussion page.

The different vehicles that can be charged

For providing the information, which types of vehicles can be charged.

If there is a number of dedicated parking places, you can provide the capacity information:

You can use the values for payment like in vending_machine=*.

There are some websites, where you can find charging stations :

Shouldn't we set the status from Draft to proposal first, and improve the whole thing before we start the voting? ;) I think you know better, what to do next, because I'm still a newbie here. --Rockhuhn 16:17, 19 May 2011 (BST)

Just use the tag if yo like it. Voting is a stupid, broken system that does more harm than good. Discuss, use and document tags, no voting. Chillly 15:29, 2 August 2012 (BST)

Ford the Netherlands you can use http://www.laad.nl to search charging stations. This includes als an App ande real time info