A process tank is a type of

storage tank that is used for the processing of chemicals, feeds, wastewater, or other components, leading to the production of a desired substance or product.

While this proposal proposes specific tagging for features associated with water treatment plant, equipment=* and equipment:stage=* are generic tags that can be used and/or extended for any industry. 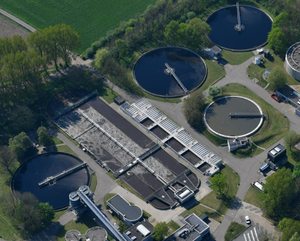 Four clarifiers and two oxidation ditches at a water treatment facility in The Netherlands.

Draw as an area

along the outline of the tank.

Tag it with man_made=storage_tank. Add the tag equipment=* if this is known.

Clarifiers, oxidation ditches, aeration tanks, and baffled tanks are visually distinct and easily identified on imagery, as show in in the examples section. Draw a way on the outline of the structure, and tag as follows from the table below. For conjoined adjacent tanks, it is acceptable to tag the entire combined tank with a single polygon. If the mapper cannot identify the specific type of process tank, it is acceptable to tag it man_made=storage_tank without additional tagging.

The specific types of process tanks described in this proposal are easily identified on overhead imagery, and are usually open on top. In cases where a feature identified on imagery is ambiguous between a tank or a building, mappers may only make an educated guess based on the surrounding context or other external information, or else leave these objects to be mapped by a future mapper with more information.

The following image from the Rioolwaterzuiveringsinstallatie Nieuwegein

Rioolwaterzuiveringsinstallatie Nieuwegein in the Netherlands shows examples of both clarifiers and oxidation ditches. 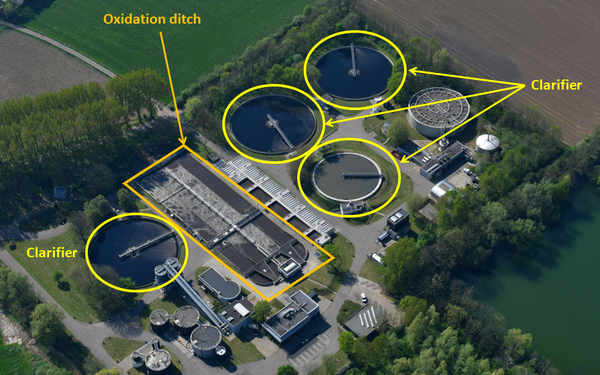 This image from the Klärwerk Ruhleben 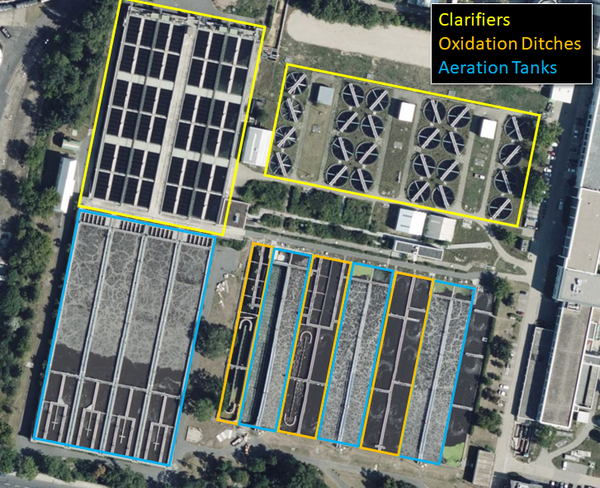 Aeration tanks are used to treat wastewater by introducing air into wastewater. These tanks are identifiable by the presence of turbulent water in the tank. However, unlike oxidation ditches, the water does not circulate in a loop.

The purpose of a clarifier is to mechanically separate both scum and sludge from wastewater. Clarifiers are recognizable by their mechanical skimming arm. Below are examples of clarifiers from water treatment plants. There are two basic designs:

Circular clarifiers use a radial skimming arm which turns around a central axis. A trough around the edge of the clarifier catches the scum trapped by the arm.

Rectangular clarifiers use a series of parallel skimming arms which move from one end of the clarifier to the other, with a scum trough on one end. Note in the example photos that the skimming arms of adjacent clarifiers are slightly offset from each other -- this is a visual indication that these are clarifiers since the sets of skimming arms in each tank typically are driven independently and will not be in sync.

Oxidation ditches are found in round or oval configurations which allow the liquid to flow in a loop. A portion of the loop is turbid, as this is where the aerator machinery is introducing aeration to the water. The key identifying characteristics of an oxidation ditch are the round or oval shape, and the visible trails from horizontal aerators as the liquid flows around the loop. In some cases, the oxidation ditches will be rectangular in shape, but with semi-circular guides at each end to direct the liquid in a looping flow. 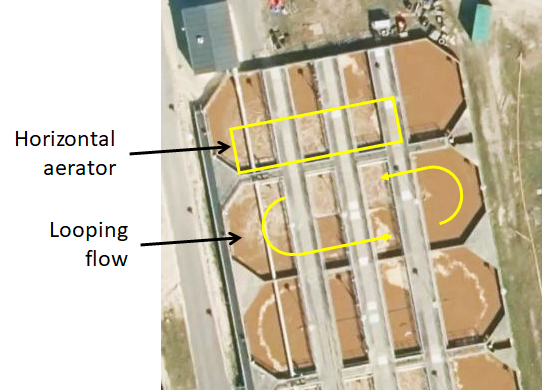 Below are examples of oxidation ditches:

Baffled tanks are found in water treatment facilities and can be identified by their geometric baffle walls. These tanks are sometimes known as contact chambers, and are used to slow the movement of liquid through the tank. They can be found in various shapes.

Below are examples of baffled tanks:

Update the following pages consistent with this proposal: