Currently fellow mappers use amenity=recycling to map anything from small paper/plastic containers up to big recycling centres. This vague definition is a problem for renderers as for routing programs, since they can't differentiate between those two, even though centres are more important than the small containers (which are used basically everywhere in countries that have a distinct recycling program).

Currently mapnik renders recycling symbols up to level 16. this would be OK for centres, but recycling containers should only be rendered at level 18 or higher. See Trac ticket 3575 By using a separate key for defining the recycling type this could easily be achieved. Also, in contrast to containers, recycling centres are more important, which would make sense for routing programs to add to their POI finder functions.

It is meant to be an additional tag to a node or area mapped with amenity=recycling. 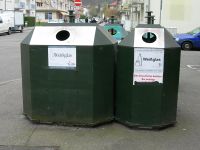 One or more containers, normally found in front of houses and apartment buildings. They are quite common in countries with a dedicated recycling program and are normally only used for the most common materials (paper, plastic, glass). This is also the default value for amenity=recycling if recycling_type=* is not explicitly mapped. 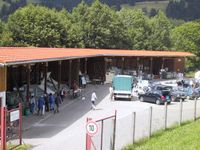 Centres are dedicated areas for collecting a wider range of recyclable household materials. Often they are operated by one or more persons on an dedicated area.

While amenity=recycling without recycling_type=* or recycling_type=container shouldn't be added to a general POI list, it would make sense to add recycling_type=centre, since these facilities are of more interest to the public and harder to find.

Presets or GUI dialogs could easily be enhanced by an additional dropdown for selecting the recycling type.

Changes based on comments from the RFC phase

Voting is now closed. 17 users voted "yes", 1 user voted "no". Proposal has reached the minimum amount of 15 votes and 8 approving votes. The proposal is approved with a majority of 94%.

this has been discussed in the comments. 1) it is not the same thing. 2) the naming is horrible. no non-native speaker would search for this string when searching for recycling centres. 3) according to tagwatch it has been used only 77 times so far. if you estimate that only about 0.5% of all elements tagged with amenity=recycling so far are centres, that would still be over three times as many as waste_transfer_stations. --Flaimo 09:20, 10 May 2011 (BST)