RunKeeper is a GPS fitness tracking app for both iOS and Android. It is also an online service where users worldwide can create routes for running, walking, cycling or other fitness activities. Routes can be created by using a phone GPS or by drawing a route on a map. 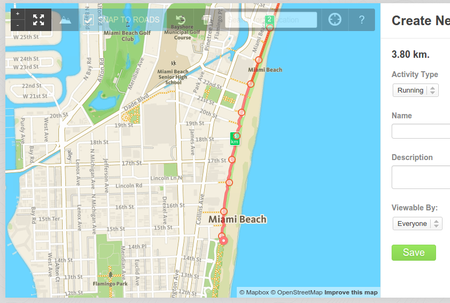 A Runkeeper running route. To make use of the routing engine the setting 'snap to roads' has to be switched on.

Routes are displayed on the Mapbox outdoor terrain map and route planning is done using the Mapbox walking directions API.[1] Routes can be made along every way that is accessible by foot, unless explicitly forbidden. Turn restrictions and one-way streets are ignored. Preference is given to paved foot paths with a solid surface over sandy surfaces. Streets and foot paths are equally weighted.[2]

In some countries foot access on highway=cycleway is not allowed unless the cycleway is tagged with foot=yes or foot=designated. It is thus not possible to create routes along these cycleways with the walking directions API.

The GPS track data and other data created by the Runkeeper mobile app is proprietary data. The maps shown in the iOS app are from Apple and maps in the Android app are from Google.