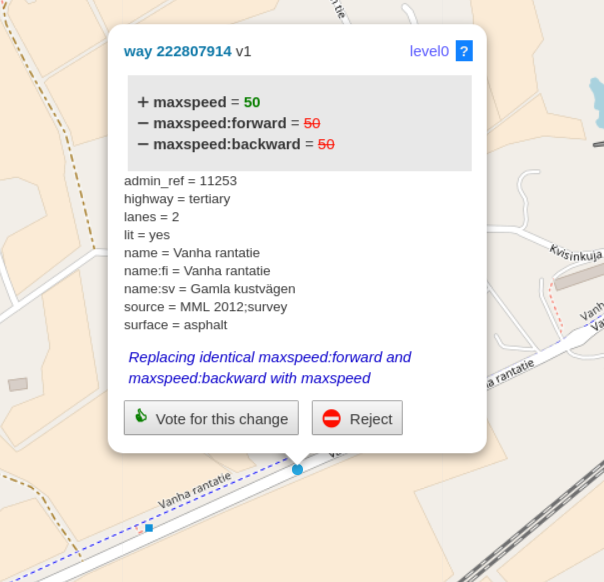 Sophox Editor is a tool to find and cleanup OSM database issues using expertise of the entire community. Sophox Editor can be used in several distinct ways: it can function as a challenge manager, similar to Osmose and MapRoulette. It can also let power users do complex query-driven search and replace tasks. Lastly, it can serve as a bot evaluation platform.

Despite everyone's best efforts, mistakes sometimes slip in, and we need an efficient way to find and fix them. Sophox editor changes are very easy to revert because all changesets are marked with the task_id tag. So in case we need to quickly revert, simply look for changsets with generator=Sophox, created_by='Sophox <version>', task_id=my_bad_task.

Sophox Editor tasks are defined using SPARQL queries. Similar to SQL, SPARQL query produces a table of proposed changes (rows). Each row must include the ?id (OSM feature ID) and ?loc (location of the object). Other columns specify the needed changes -- tag names and their desired values.

For example, let’s say we would like to replace identical maxspeed:forward=* and maxspeed:backward=* tags with the maxspeed=* tag. First, we need to find all features that have both of these tags, and whose value is the same for both. In SPARQL, this would be done with two statements. Because we used the same variable name for both statements, the results will only match when both maxspeeds are equal.

Additionally, we should check if maxspeed=* tag exists, and if its value is different. Our result should only include features that either don’t have a maxspeed=* tag (the ?opt_maxspeed variable is unbound), or when it has the same value as the other two tags.

Lastly, we need to include the feature's location on the map. Note that unlike tags, which use osmt: prefix, location is part of the feature metadata, so it uses osmm: prefix.

Because we have used ?tag_1, there must be a corresponding tag’s value, specified with ?val_1. We alias our existing ?maxspeed value here:

This change will be ignored if the feature already has a maxspeed tag with the given value. To delete a tag, set its value to false:

Additionally, Sophox needs some metadata to operate. Each task should have a taskId, so that if user votes or rejects a change, it can be associated with the query. Also, the task needs a comment to add to the changeset. These and other values can be set using a JSON object. NOTE: In the query, this text must be on a single line. Here we break it up for readability. The “vote” requires users to vote on the change before changing it (two person agreement)

Putting it all together, we end up with this query. Click "run it" to see the results, or edit query to view it inside the tool. A similar validation already exists in JOSM, so it does not require voting, but all uncertain and controversial tasks should start with voting first. 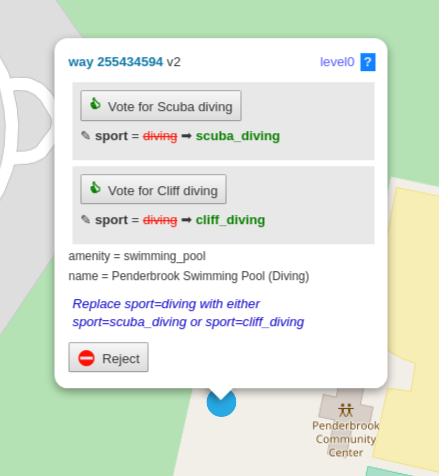 In some cases, we cannot describe the change in terms off accept vs reject. Instead, we have a set of well known choices, and allow users to research and choose the correct one, or reject them all. For example, sport=diving has been deprecated and needs to be replaced with either sport=scuba_diving or sport=cliff_diving.

Lastly, we must define what we want to call groups A and B using the "labels" parameter inside the editor configuration at the top.

Rejections and votes are stored in the same RDF database as OSM features, which means your task can access this information as part of the regular query. When voted, the following data is added. The vote value is one of these: osmm:pick_no (change rejected), osmm:pick_yes (accepted), osmm:pick_a .. osmm:pick_z (multiple choice vote).

For example, you can use this extra condition with the above query's WHERE clause to show only the rejected changes: