From OpenStreetMap Wiki
Jump to navigation Jump to search
Tag:bicycle=dismount - Other languages

Tag sometimes used to express that (1) riding bicycle is not allowed (2) pushing bicycle is allowed. bicycle=no on object allowing foot traffic is also often used for the same purpose. 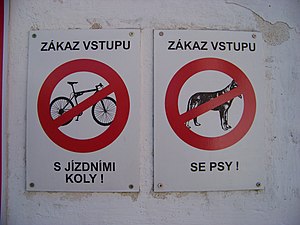 In some places it is illegal to both ride and push bicycle[1], there is no good tagging scheme to indicate it[2], bicycle_pushed=no, bicycle_pushing=no and bicycle_possession=no were suggested[3][4].

Note that while roads/footways completely banning even pushing bicycles are quite rare compared to ones where just cycling is not allowed, bicycle=no is far more popular. It is used over 942 000 times together with highway=*[5] while bicycle=dismount just 73 000 times[6]. It indicates that majority of mappers is using bicycle=no to indicate places where pushing bicycle is OK.

Even if someone is using bicycle=no with intention to state that pushing/carrying bicycle there is forbidden it is impossible to distinguish bicycle=no mapped with meaning "no cycling" and "no presence of bicycles is allowed". It makes this two tags a de facto equivalent.

As of 2020 "dismount" value is supported by iD while not supported by JOSM. OSRM includes ways tagged with bicycle=dismount in cycling routes but indicates that bike-pushing is required. (Some versions of OSRM similarly recommend pushing a bike against the flow of traffic along a one-way street.)

bicycle=dismount appeared and was used without consideration that it de facto duplicates older bicycle=no[7][8][9][10]. This attempt to redefine bicycle=no from "bicycling is forbidden" to "bicycling and pushing bicycle is forbidden" was not succesfull.

Multiple people like this tag and want to use bicycle=no for "not even bicycle pushing is allowed".

Standard opposition to deprecation/redefining of major tags is present.

And at that point it is easier to simple have a new tag for rare "no bicycle at all in addition to forbidding cycling".