From OpenStreetMap Wiki
Jump to navigation Jump to search
Tag:man made=windpump - Other languages

A wind pump is a kind of windmill, usually mass-produced and made of metal, that is typically used for pumping natural gas or water. In North America, they are also referred to as weathercocks or simply windmills.

Wind pumps are used extensively in Southern Africa, Australia, and on farms and ranches in the central plains and southwestern United States. Although they are a type of windmill, they are distinct from a man_made=windmill by their distinct construction, smaller size, and numerous small rotors.

at the centre of the windpump and tag with man_made=windpump.
They can be combined with man_made=water_well and amenity=watering_place.
If you know it you can extensively complete it with pump_mechanism=*. Many wind pumps use pump_mechanism=piston and may be manually driven by handle=lever in case of lacking wind.

As you see on the chart below, a wind pump can be associated with several other features, like man_made=storage_tank. 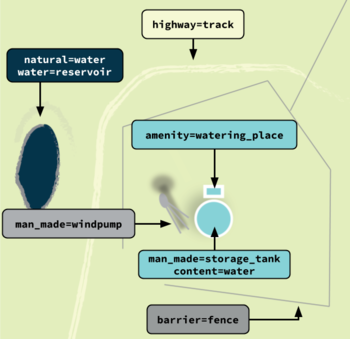