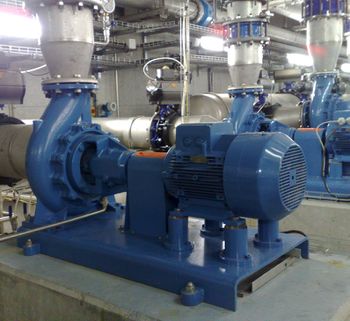 It is proposed to make three new tags approved to describe pumps used for any activity regarding liquids only :

Introduce a new tag pump_mechanism=*: "Specifies the pump device mechanism that directly moves gases or liquids". Applicable with any gas or liquid substance=*s.
List of 15 new approved values out of Wikipedia classification related to pump mechanisms is given below.

It is proposed to deprecate the use of undocumented pump:type=* to state pump mechanisms in favour of new pump_mechanism=*.

The proposed tagging scheme will also deprecate man_made=pumping_rig and propose to replace it with man_made=petroleum_well or man_made=water_well and pump_mechanism=* (mainly with rotating driver and pump-jack coupling).

By the way, this proposal focuses on pumps and then liquids but proposed pump_mechanism=* values would be used the same way on gas compressors which will require a different man_made=* entry.

Pumps differ from several other devices and as such the two following machines will not be included in this proposal: 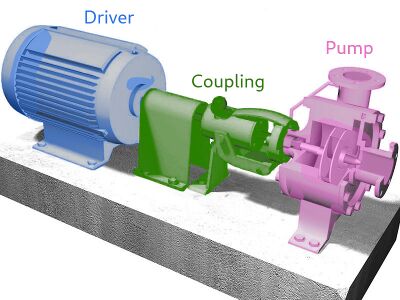 Two primary motives and outcomes of this proposal:

Pumps are mechanical devices to move liquids and are a common component of industrial systems and water supplies. They can have many different shapes and functions. They are found in many settings, from households to heavy industries.

As they cover many activities, several pumping mechanisms exist and are adapted to field or fluids constraints and the available energy sources. Consumers may have interest to know their purpose, system characteristics, pipes connections and the source(s) of the incoming fluid.

Three main components comprise a typical pump assembly: 1. Driver 2. Coupling and 3. Pump, but to date OSM tagging has not allowed for the inclusion of this additional information.

Note that pumps are usually powered by a driver through a coupling mechanism. To clarify:

Wikipedia and other encyclopedias provide a complete classification of pumps with several considerations: principle, engineering, history and use cases (not to mention practical implementations). OSM will rely on Wikipedia's classification as to not create another classification but ground-proof tagging method for mappers to classify pumps with practical and available criteria.
Proposed pump_mechanism=* values will allow mappers to determine which kind of pump they see on ground (see examples). Quantifiable figures and capacities are obtained from public documentation or read in place (via nameplates or pump tags). No import from any database is planned following this proposal as contributions are expected from on-site surveys.

This proposal focuses on tags to use if, and only if, data is available. It does not assume all data can be publicly known but provide a consistent model to add it to the map if possible, without any pipeline operator help. If you can't reach a particular device, then don't map it. 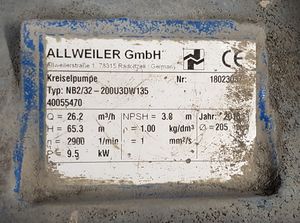 First of all, don't go inside private or restricted perimeters if you're not invited to do so please, some pumps may not be safely accessible and you may expose yourself to multiple hazards.

On every pump device (not the surrounding perimeter nor building) found, place a

and add the tag man_made=pump (if no other man_made=* value prevents it as explained below).

Use location=* to give information about its position and pump_mechanism=* to let us know about its mechanism.
High detailed information may be found on pumps themselves. A complete datasheet may be posted next to the pump which shows the device capabilities and mechanism (see beside).

Nevertheless, you may not be permitted to take a photo of those plates and as a reminder : don't go inside restricted perimeters to get the one you couldn't unless invited.

man_made=pump is only proposed for individual pump devices.

This proposal won't change how man_made=pumping_station is used on buildings.

Pumps used in industry and located inside technical buildings called pumping stations are covered by this proposal.
Mappers may find publicly available documentation or be able to see from public space how pumps are installed inside and apply guidelines upside.
Every pump should get its own OSM node inside the building, approaching their actual position, with appropriate tagging described below.

Proposed pump_mechanism=* values can be used in combination with established man_made=water_well, man_made=petroleum_well or any other drilling.

The point of this proposal is to complete existing features with more elaborated information about pumping capacities. Then a dedicated man_made=pump shouldn't be created beside if the pump is directly installed in the well or on the wellhead.

Proposed pump_mechanism=* values can be used in combination with established man_made=windpump which refer to an assemble of blades taking kinetic energy from wind and driving a pump on the ground.

As to maintain a difference with traditional man_made=windmill, a dedicated man_made=pump shouldn't be created beside if the pump is directly part of the wind pump.

Althought it is not usually recommended to add properties of incoming pipelines to accessory nodes, it is correct to add substance=* on pump nodes to state which substance is processed by a particular device, especially when pumps don't operates mixtures or change the state of the substance.

Mechanisms classification is taken directly out from Wikipedia classification that anyone can read to understand how each work.
These pumps are also compatible with compressors as show in this second article.

Drivers are defined as mechanical energy converters and the main source of power for pump mechanisms. They can work from many sources of energy: electricity, steam, wind, electromagnetic forces, etc.
Drivers are only motion sources and require a coupling to transmit the power to the pump mechanism.

In case of manual driver, existing handle=* will help to define how users are supposed to move the pump. It's proposed to add additional values suitable here

Existing handle=lever is suitable to some pumps as Wikipedia deals with it for hand pumps. Lever pumps are actually piston/diaphragm/... pumps with lever driver. It sounds to be a 3rd class lever.
Lever handle sounds to have different forms and this is what we get when looking for them 3 :

As motion often needs to be adapted, drivers can be more complex than a simple motion source and could include a mechanical adapter (gear reducer, nodding donkey...). Torque can be adapted in different ways from a single given electric motor for instance.
Couplings are passive equipment and not a motion source. They are particularly useful for pumps as they put impellers or pistons in motion and efficiently move the processed fluid.

List can be completed with any additional value to cover situations we didn't include here.

Keys to be replaced or completed

There is no automated edit planned once this proposal reviewed. All replacements will be done manually with caution on every feature.

It was approved with 20 votes for and 1 vote against.

This proposal doesn't modify pressure=* and its unit is bar. No problem to use other explicit units if required anyway. Fanfouer (talk) 23:14, 4 January 2021 (UTC)

This proposal doesn't modify pressure=* and its unit is bar. No problem to use other explicit units if required anyway. Fanfouer (talk) 23:14, 4 January 2021 (UTC)

pump=* exists and will be preserved in water wells documentation. It wasn't mentioned in this proposal as to make it clear nothing changes about its status following this vote and comment received after first vote Fanfouer (talk) 23:14, 4 January 2021 (UTC)