From OpenStreetMap Wiki
Jump to navigation Jump to search
Tag:sport=bandy - Other languages

This tag can be used in association with nodes and areas marking the location of bandy-related venues. Multiple values can be used, i.e. sport=bandy;football, whenever the same venue is used for multiple sports.

Bandy is a team winter sport played on ice, in which skaters use sticks to direct a ball into the opposing team's goal.

The sport has common background with association football, ice hockey and field hockey. Like football, the game is normally played in halves of 45 minutes each (however, in the World Championships the halves can be 30 minutes each), there are eleven players on each team, and the bandy field is about the same size as a football pitch. It is played on ice like ice hockey, but like field hockey, players use bowed sticks and a small ball.

If it is very cold or if it is snowing, the match can be broken into thirds of 30 minutes each.

A variant of bandy, rink bandy, is played to the same rules but on a field the size of an ice hockey rink and with fewer people on each team. Bandy is also the predecessor of floorball, which was invented when people started playing with bandy sticks and light balls when running on the floors of indoors gym halls. 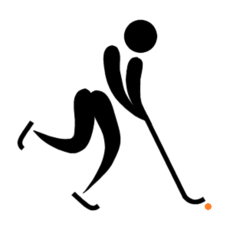 A pictogram for Bandy
Retrieved from "https://wiki.openstreetmap.org/w/index.php?title=Tag:sport%3Dbandy&oldid=2410324"
Categories:
Hidden categories: