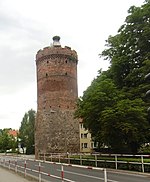 The current picture shows a watchtower of the border between Germany and Germany. These towers didn't serve true defensive purposes (only in the Eastern german official view the wall was a "protective wall against the (American) imperialism", whilst most people see it as a fence to prevent the own citizens from escaping). There are less ambiguous examples like this: --Dieterdreist (talk) 09:15, 2 December 2016 (UTC)

I understand your intentions, however both the German border tower from Marienborn and your Müncheberg example are historic, they don't serve defensive or protective purposes currently. Maybe we can find a truly defensive one that is in use. --Polarbear w (talk) 10:52, 2 December 2016 (UTC)

The tower type is not about the current function but about the typology of the tower. There are hardly any defensive towers today anyway, at most radar towers might qualify, but that's really not how tower:type is applied typically. --Dieterdreist (talk) 09:00, 3 December 2016 (UTC)

Well then it probably depends how wide or narrow you define the process of defending. Your radar example is defending by electronic monitoring. The Marienborn tower was for defending the border by visual monitoring against trespassing (from whichever direction). The Müncheberg tower shows support for defending by shooting arrows trough embrasures. --Polarbear w (talk) 12:35, 3 December 2016 (UTC)

indeed, I agree the radar tower would be a border case as well, and I'd rather suggest a new value if needed. The Müncheberg Turm is probably better classified as watchtower. --Dieterdreist (talk) 12:54, 3 December 2016 (UTC)

probably "defensive" wasn't the best choice for the value, anyway it has 1800 uses now. Watchtower (144) would have been a better fit, for country borders, medieval city-walls and prisons alike. --Polarbear w (talk) 13:25, 3 December 2016 (UTC)

Both are valid types, for prisons and borders, watchtower is fine, for medieval city walls and castles, defensive is fine. --Dieterdreist (talk) 10:46, 4 December 2016 (UTC)

Sorry, I didn't necessarily mean to invent a new tag, I as thinking about the "observation" type when I actually wrote "watchtower" (but a new "watchtower" tag would not be bad anyway). As for the question about objects with the tag tower:type=defensive: I would expect them all to describe defensive towers. In cases they do not, the tower:type subtag should obviously be changed. There is nothing special with this tag, it is always like this with all OSM tags. --Dieterdreist (talk) 10:36, 5 December 2016 (UTC)

I am looking for a picture of a tower, tower:type=communication + tower:construction=lattice. It should not be a mast. You can search for it with Overpass.--geozeisig (talk) 15:14, 14 March 2018 (UTC)

Wikimedia search is your friend. What about this one?

The first example does not clearly show me the antennas.
The second example could also be interpreted as a mast. At this point you should have a clear example.--geozeisig (talk) 06:35, 15 March 2018 (UTC)

Added another one. The problem is, besides the blurry differentiation mast/tower; once you find the huge tower for your example, the antennas would be small on the picture. --Polarbear w (talk) 09:57, 15 March 2018 (UTC)

It was here on the page before it was converted to a template by @Geozeisig. A number of types have been forgottn, including climbing. --Polarbear w (talk) 11:12, 7 September 2018 (UTC)

This specific value is now present. Anything else missing that should be readded? Mateusz Konieczny (talk) 09:53, 17 January 2021 (UTC)

Next to motorways, it is not uncommon to see large towers with advertising for nearby fast food chains, stores etc. Should those not get a category?

can you show some example pictures? The is also a specific tag for advertisement related infrastructure: advertising=* —Dieterdreist (talk) 12:56, 8 March 2021 (UTC)

For this lighting tower

this lighting tower that apparently has mobile phone antennae in it, I'm going to use tower:type=lighting;communication, communication:mobile_phone=yes unless someone has a better idea. —M!dgard [ talk ] 00:46, 17 June 2019 (UTC)

We have made man_made=tower an almost useless tag, because most what you would like to know about the poi typology is pushed to tower:type. The tower tag unites a lot of very different things under an umbrella with the common denominator that it has the word “tower” in English as part of its name. I propose to shift in the opposite direction and encourage tagging of things on the top level, e.g. man_made=cooling_tower instead of tower:type=cooling. —Dieterdreist (talk) 00:43, 17 January 2021 (UTC)

Yes, both schemes are in use. My comment was meant to change this and prefer one over the other, actually to move away from tower:type. What's your opinion on this? --Dieterdreist (talk) 21:49, 18 January 2021 (UTC)

Personally I prefer man_made=cooling_tower over tower:type=cooling, consider using tower:type for masts as weird. But I am not going to do anything in that direction, except personal tagging preferences, commenting in discussion or voting in a potential proposal. Mateusz Konieczny (talk) 21:57, 18 January 2021 (UTC)

tower:type has the disadvantage that the sufixe :type is meaningless, which does not make it clear whether the appearance or function is indicated (how do you indicate a cooling tower that is no longer used for cooling but as a support for a telecom antenna ?). 2 unambiguous keys would be preferable like the existing :use for building and maybe :architecture (but of course we know the allergy of a part of the community to depreciate a used key).
man_made=*_tower has the disadvantage of being usable only if we know the type of tower, when I see that a majority of people think that a cooling tower is a nuclear power plant, it's rather an advantage not to have this kind of choice in the primary key but to allow an incremental contribution (the first contributor enters the primary key and stops there if he doesn't know more, another contributor will add additional information without having an incorrect primary tag in the meantime) Marc marc (talk) 10:06, 19 January 2021 (UTC)