Using place=* as a marker of importance. In many European countries, that key is associated with political/administrative status. This is interesting because it brings together many potentially conflicting interests (e.g.: concentrated wealth vs population size vs niche activity such as military bases or tourist destinations). As such, it is a factor that helps OSM maintain itself neutral to diverging interests. Where such an association hasn't yet been made (many of the countries with a less developed OSM community), it is associated with population size, which is an easy and very objective factor to consider.

Many ways would be classified solely for being "part of a route" (no need show the same physical characteristics as the rest of the route), hence "(route)" in their suggested functional names. If a way is part of two routes of different class, the inferior route is considered to branch off from the superior route, so the way should be assigned the superior class. These rules also work well for routes across country borders.

¹The opposite end destination should be of same or greater kind. For example: a tertiary connects two villages, or one village to another town, city, or metropolis. The destination is not an exact point, it is usually an area. Within that area, classification usually depends on continuity. For instance, secondaries within a suburb usually depend on routes connecting other suburbs rather than the suburb itself (it might be easier to begin with very distant suburbs), primaries within a city are those that connect the incoming primaries from the outside (the same would be valid for trunks; this usually leads to the formation of rings or arcs near the city core), etc.

misinterpreted in some places. "Free" refers to the fact that traffic never has to stop to wait for other traffic. All typical at-grade crossings of other highway types are replaced with overpasses and merging lanes.

Most cities develop approximately in a radial pattern, this is why a city formed by radiating ways and concentric circles and arcs is used as a basic, general model for classifying the streets of most cities. Cities planned as a grid will usually function in a radial pattern, with more activity at the core and radiating traffic to suburbs along preferential ways. As the city grows, important systems of rings and arcs naturally form as adjacent suburbs need to be connected to each other and incoming traffic needs to be routed around a congested city core. Systems of arcs that are not perfectly continuous sometimes provide the function of a continuous ring. Natural features often force distortions on the radial pattern. This includes rivers (before bridges are built over them), coastlines (straight, peninsular or bay-like) and terrain features (hills, mountains). Lack of urban planning may also produce such distortions, but it tends to fix itself over time for the higher levels (secondaries and above). Quite often on coastlines, the radial pattern will tend to elongate along the coast, resembling an ellipse instead of a circle.

Because motorways do not depend on their connections, they're not included in the illustration.

Please contact me if you're interested in modifying the OSM file that generated this illustration. There are no neighbourhoods 4 to 7 due to a typing mistake in "neighbourhood 8" (which should have been 4). 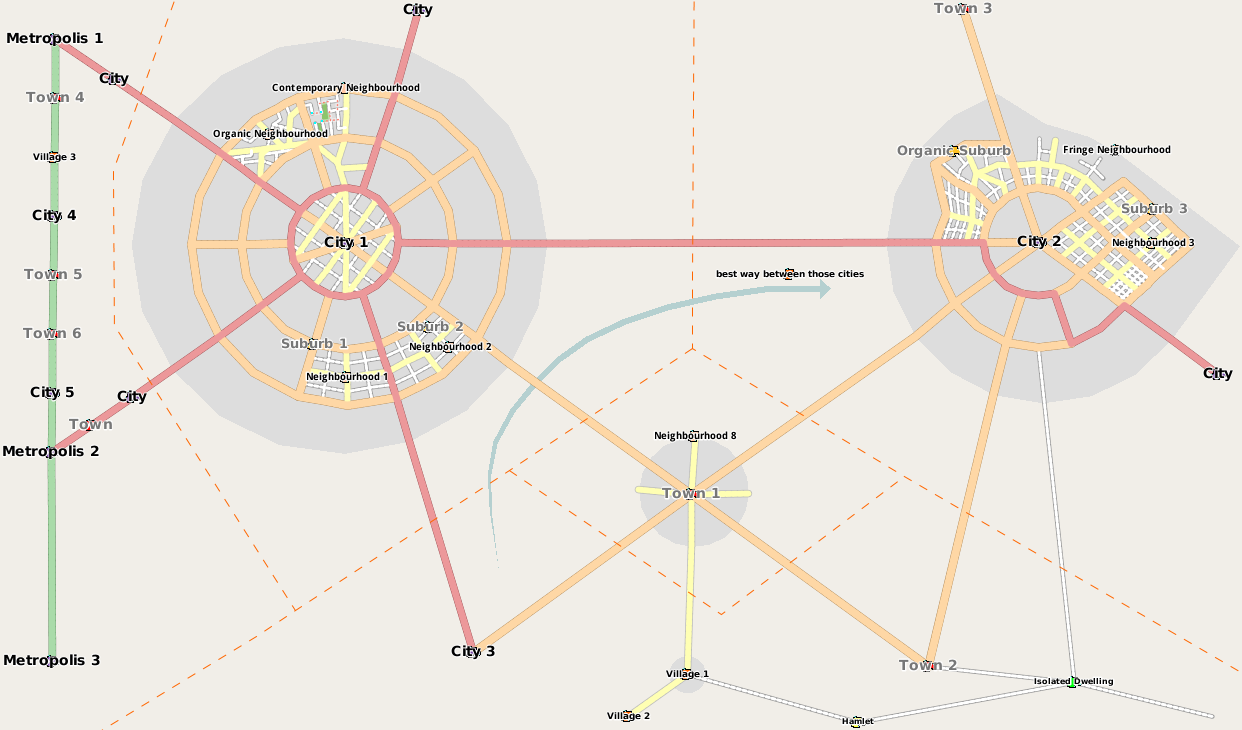 Cities do not need to have actual suburbs and neighbourhoods, but they often form such structures. Suburb and neighbourhood nodes/centroids do not have to align with corresponding way crossings. For example, suburb 1 in the illustration is aligned, others are not. Actual suburb boundaries do not have to align with secondaries, but often do in some countries.

In organic suburbs and neighbourhoods, it is sometimes possible to match the highway mesh to a more or less grid-like subdivision of space. This often suggests which streets are tertiary or secondary when an official classification is missing or when surveying for rights of way and road attributes (width, surface, etc.) is not possible to the mapper.

If you can survey the area, then at least the following property must be valid: tertiaries always have right of way over residentials/unclassified, and secondaries always have right of way over tertiaries. When the area has poor signage, drivers' behaviour usually depends on physical characteristics such as road width and surface quality, with "ways with assumed priority" being better in both qualities.

The main route between two towns (for example, town 5 and town 6) is not always secondary, it is however always at least secondary. This suggests the following classification procedure for each road stretch:

Evaluating which ways are trunk based on metropolises may require knowledge of an entire continent, so it's best to have communities agree on a set of ways considered trunk and stick to that set. Primaries usually require a much smaller scope (countrywide or statewide), often simply looking at adjacent cities.

In densely built areas, the question changes from "connects" to "distributes to/from". For example, given a way in a neighbourhood:

In "fringe" neighbourhoods, it makes little sense to declare a street a "tertiary" unless there is at least another parallel way for at least part of the way's extent.

Assigning many parallel roads the same very high class (like primaries, or even tertiaries) is usually an interpretation mistake. It is so because it doesn't help users choose their ways visually, nor make assertions about expected traffic (important at least for drivers, cyclists, and urbanists). That situation only makes sense if these ways belong to a greater, continuous system that is very high class. Since primaries connect cities, they would usually not appear parallel to each other; instead, they would be very long. Within the same city, specially in grid cities, many streets may connect multiple neighbourhoods, but still there is usually one or two that dominate; those should be secondaries, the others not. This creates a map where classification is sparse (easy to distinguish) at all zoom levels: most neighbourhoods are composed by many residentials and a few tertiaries, most cities are composed by many tertiaries, some secondaries and few primaries (towns would have some tertiaires, few secondaries and usually no primaries, unless they're in the route of two other cities), most states/countries are composed by many primaries and few very distinctive trunks/motorways.

This system does not require all classes to be present in any given area. For instance, the primary system could be entirely implemented by motorways, in which case no primaries are supposed to exist. This seems to be the case in Toronto.

Comparison to places with challenging classification

Note: the formation of primary rings and arcs is a consequence of connectivity between neighbouring cities through the city itself. Such arcs and rings are not a by-design feature, and indeed in some cities they may never form - there could be a single crossing of primaries at the city center. Primary rings and arcs may not form in case the city has a surrounding motorway ring which captures all through routes. Both scenarios are unusual but possible in principle. Because of that, a ring may be not entirely of the same class (for instance, primary). But a ring can be fully primary in certain cases, as an emerging consequence of routing between other cities. Additionally, as the city develops newer and better outer connections, inner primaries, including rings and arcs, may be downgraded to secondary.

Modifying the idea of primaries as "connecting city cores" to "connecting city cores outside the built up area of the city, and inside connecting the incoming primaries" would usually classify most ring roads as primaries, and would also handle cases where no road is officially declared a "ring" road. In less developed areas, this could turn some unpaved/unsealed roads into primaries, which should be fine when this issue is solved.

The same idea extends to trunks, by replacing "cities" with "metropolises/capitals/entrypoints of national highways".

There are several important advantages in this system compared to its alternatives:

Some have suggested that destinations such as airports, mines and tourist attractions (including some national parks) should influence the decision of road classification in certain situations. It can be argued that, when the number of visitors (tourists, workers, even somewhat permanent residents, etc.) over a period (such as the busiest day of week, at high season) is comparable to that of another settlement (typically 1k+ for villages/neighbourhoods, 10k+ for towns/suburbs, 100k+ for cities), that would justify increasing the road's class. Indeed, one could see permanent residents who commute (thus generating traffic) as similar to visitors of any kind (including then tourists and workers). Most of those situations would only cause roads to be promoted to tertiaries. One does not need to know surely and exactly how many regular visitors a destination has, just have an approximate notion of its order of magnitude (1, 10 or 100 thousand).

Without the idea of "number of visitors", a list of "important places" would have to be agreed on by the local community, and preferably written down in a common place. Foreign contributors might miss that workflow and end up making mistakes.

Adaptations whose importance is demonstrated on organic, developing or poorly planned areas

"Main road" cannot be strictly defined because it depends on the size of the place where the road is. "Residential" may suit small settlements [like towns], but national highways often pass through larger settlements [like cities]. Road class should transition into the local area without hopping, so the road at the entrance of a place normally takes the class of the road carrying inward. When a highway=unclassified is a town's main incoming road, it continues as "unclassified" inside the town.

In cities where primary roads have lost their previous significance, the strict rule of assigning primary to a "higher road" [a national highway] can be relinquished for roads that no longer belong to a higher road network. It may be useful to fill noticeable gaps with primary. Ring roads in major cities are sometimes classified as national roads, and then they are clearly mapped as "primary".

Thoroughfares are used primarily by through traffic (note: traffic that passes through the place, whose destination is elsewhere), but typically also have residents traffic. Their speed limit is usually 50 kmph, sometimes 60 kmph. A distinguishing feature of thoroughfares is better construction quality relative to residential ways, which can also have multiple lanes running in opposite directions. They usually have priority (right of way), better signage and improved intersections.

Thoroughfares with right of way, which lead into a neighbourhood or a residential area, are typically highway=tertiary.

Thoroughfares without right of way can be entered as highway=unclassified.

These roads in populated areas typically have:

priority to the right usually applies, as if entering first in a roundabout. Another criterion is that residential roads surround 30 kmph zones in privileged areas. Not strictly required when there are "Residents only" signs.

Greater roads with adjacent houses, with or without right of way, should be entered as thoroughfares (secondary or tertiary) or as main roads (primary).