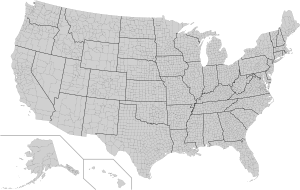 Boundaries of states, counties, and county equivalents in the continental United States ("lower 48" states) plus Alaska and Hawaii

The borders of the United States and those of its political subdivisions are represented by administrative boundary relations. The somewhat-paired tags boundary=administrative and admin_level=* are applied to these relations (and often their member ways, for software compatibility reasons) to indicate their relative level in a political hierarchy. Additionally, border_type=* was and is used inconsistently on land boundaries, largely due to import legacies. However, on maritime borders with specifically-defined values, border_type=* is used consistently.

Renderers typically display these boundaries as dashed or dotted lines and may use boundary relations for other purposes, such as to display state-appropriate highway shields. Geocoders use the boundary relations to identify places and construct full addresses. For debugging purposes, this rendering is recommended.

This article is a basic tagging guide for U.S. admin_level=2, 4, 5, 6, 7, 8, 9, 10. It discusses tagging practices that either are already in wide use in OSM or have achieved consensus through the proposal process. In the interest of clarity, this article does not discuss novel tagging proposals. There are numerous exceptions to the information below, some of them quite significant, but this article ignores them in order to focus on how to tag new features as they come up. For a more detailed explanation of governmental structures described in this article, see United States admin level and Wikipedia's series on U.S. Political divisions.

If you don't see an entry corresponding to the kind of boundary=administrative you are trying to map, consult the corresponding section for more details. If the section doesn't say how to tag the boundary either, it could be that similar boundaries have yet to be mapped, or perhaps the community has yet to reach consensus on how to tag them. In that case, try to be consistent with the entries below when mapping, and let the talk-us mailing list know what you come up with. Again, see United States admin level for more detail. 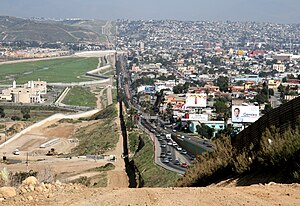 The federal border is represented by 148838

You may find some renderers (notably Carto/standard), especially at very wide (global) zoom levels, display certain members of this relation (Alaska's westernmost Aleutian Islands, Guam and Northern Mariana Islands, Wake Island) in a seemingly inconsistent or unusual manner. This is because these areas are west of 180 degrees (the antimeridian): some renderers may require an additional easterly "pan around the globe" to display them. 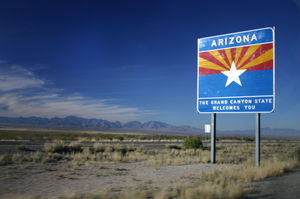 An Arizona welcome sign at the border with New Mexico

Where the border delineates state territorial waters (e.g., 3 nautical miles off the Atlantic coast), the member way is tagged border_type=state maritime=yes. Generally, borders along waterways follow the thalweg (deepest path along the channel). However, state river borders are more nuanced, especially along the Mississippi River and Ohio River, whose banks have changed significantly over the centuries. Do not expect to be able to "eyeball" a state border along a river using aerial imagery.

Strictly speaking, United States Minor Outlying Islands (USMOI) is not a boundary=administrative, it is a statistical grouping. However, it is convenient, as all eight Pacific islands or island groups plus one (internationally disputed) island in the Caribbean Sea (each of which are territories) are grouped into a single relation. As with the five coastal/ocean states that have boundaries with the Pacific Ocean and the 17 states that have boundaries with the Atlantic Ocean or Gulf of Mexico, each of these islands has U.S. territorial waters as described above, sufficient to delineate the national boundary around USMOI. 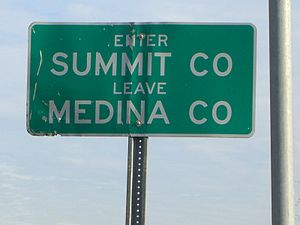 Boundary relations of political subdivisions of U.S. states known as counties (including Louisiana parishes and Alaska boroughs) are tagged boundary=administrative admin_level=6. Some counties are additionally tagged border_type=county. A county boundary relation's name=* tag should include the word "County" (or "Parish" in Louisiana or "Borough" in Alaska). More county boundary data are available for Georgia, Ohio and Wyoming.

County boundaries come from USGS data, which are accurate but have lower resolution than other data in OSM.

Outside of the 50 states, and as each of these are "territorial municipalities": districts of U.S. Virgin Islands, municipios of Puerto Rico, villages of Guam, districts and unorganized atolls of American Samoa [4] and islands and an island group in Northern Mariana Islands are tagged admin_level=6, the same as counties in the 50 states. Puerto Rico's municipios and wards were imported from Puerto Rico Planning Board data, while Guam's village data (names end in "Municipality") are from the Census Bureau. A territorial municipality boundary relation's name=* tag should include the word "Municipality" (or one of its flavors: district, municipio, village, unorganized atoll, island or island group).

Welcome sign at the border of Meridian Charter Township, Ingham County, Michigan. Note that townships and municipalities sometimes place welcome signs at the entrance to business districts rather than their borders.

The Census Bureau infers that Civil townships exist as administrative subdivisions in 21 states. They are usually known as townships or towns (Utah uniquely calls these "metro townships" and there are distinct "charter townships" in Michigan) and are characterized by the fact that they completely subdivide counties (admin_level=6). Hence, civil townships of this kind (including those named "towns") are always tagged boundary=administrative admin_level=7. Depending on the state, it may be possible for a city or village to subordinate to one or more townships, or for a city or village to withdraw from a township, becoming a direct county subdivision. A civil township boundary relation's name=* tag should be prefixed with "Township of" (or "Town of" or "Charter Township of" or "Metro Township of") or suffixed with "Township" (or "Town").

Some states (Maine, New Hampshire, New Jersey, Pennsylvania) have administrative subdivisions named "township" but these are not "civil townships" as described here, these are actually city-like, rather than township-like. While this is admittedly confusing, in these four states these should be tagged admin_level=8 (9 in Maine), not admin_level=7. This decreases the number of states asserted by the Census Bureau (21) by four (to 17) that OSM might agree contain "civil townships."

OSM's TIGER 2005 import omitted minor civil division (MCD) boundaries, including civil townships. Mappers add them manually, often tracing USGS Topographic Maps, where township boundaries are generally shown as black dashed lines. These maps can be slightly misaligned in places, so it helps to switch back to aerial photography once in awhile as a sanity check. If you know the general vicinity of a township line, you may be able to spot a change in pavement quality where one township repaved its road up to the township line.

As mentioned above, except for maritime borders, border_type=* tags suffer from inconsistent application due to legacy imports. Because of this, they might become or are becoming deprecated on land borders. For what it's worth, you may find border_type=* tagging on townships in several of these 17 states. For example, in Connecticut, New York and Wisconsin, border_type=town tagging is found, while in Indiana, Kansas, Maine, Michigan and Ohio border_type=township tags exist (additionally, border_type=charter_township is found in Michigan).

Municipalities are known by many names, such as city, town, township (be careful, see Civil townships above), village, and hamlet. Especially as it is known in the fifty states as "incorporated," tag a municipality with boundary=administrative admin_level=8 and perhaps an appropriate border_type=* tag, such as border_type=city. In rare cases, an unincorporated community may have well-defined borders that justify a polygon or boundary relation tagged boundary=administrative, but it usually suffices to tag these with a place=* node.

In some states, it is possible for a city government to own property outside the city limits that is not considered part of the city. For example, a city may own a park or airport that lies within a suburb or unincorporated area. If this is the case and the property is not considered to be an exclave, then omit the property from the boundary and use the ownership=* and operator=* tags to indicate ownership and who operates the property (respectively).

See the section "Counties, parishes, boroughs, etc." for information on municipalities or municipios in U.S. territories, which are not equivalent to municipalities in states. These "territorial municipalities," which go by several different names, are always admin_level=6, never admin_level=8.

Medium-sized and large cities may have formal subdivisions, variously called neighborhoods, districts, boroughs or wards. Where these subdivisions serve as a system of general-purpose units of government with well-defined boundaries, they are tagged boundary=administrative admin_level=10. In some cities, these subdivisions may correspond to voting districts, but this is not necessarily always true. In cities which contain both wards and neighborhoods, it may make sense to tag the wards admin_level=9 and the neighborhoods admin_level=10, to preserve this hierarchy. However, if a ward is only distinguished for electoral purposes, tag it as boundary=political political_division=ward.

For example, each neighborhood of Cincinnati, Ohio, has a semiformal neighborhood council, and the neighborhood boundaries are well-known. By contrast, many of the neighborhoods of San Jose, California, are amorphous, so they are instead mapped as place=suburb nodes. Naturally, there is much gray area between these extremes, so use common sense. If boundaries of a neighborhood are subjective and impossible to verify using signage alone, chances are the neighborhood is better mapped as a node. Especially when tagged as nodes, such smaller, named place=*s or populated areas inside of larger cities have a distinct method of tagging (e.g. place=suburb, place=quarter, place=neighbourhood...): see place=* for details.

Examples of cities with formal subdivisions include Chicago, Illinois; Cincinnati, Ohio; Cleveland, Ohio; Minneapolis, Minnesota; Seattle, Washington; Tucson, Arizona; and Washington, D.C. In Washington, D.C., "neighborhoods" are entered both as nodes and as polygons tagged boundary=administrative admin_level=10, the nodes appear to be "improving towards" polygons.

Areas of New England have state-specific idiosyncrasies regarding "towns" and "villages" which are subordinate to counties and cities (not necessarily respectively). Be careful with these and check the table for what are believed to be the current best tagging strategies. However, if you believe the structure in the table needs updating, please use the Discussion page.

In smaller-sized cities, especially suburbs (not in the OSM sense, but in the US English sense of "smaller incorporated city near a large city"), consider mapping (sometimes homeowner association–managed) residential subdivisions with landuse=residential ways (often closed polygons). If there is no particular management but there is a clearly named or signed identity to a residential subdivision, a landuse=residential tag on ways (often closed polygons), plus a name=* tag suffices. (Omit admin_level=*). On the other hand, some planned communities such as The Woodlands, Texas have a formal system of named subdivisions, which could be mapped with type=boundary, but actually are mapped with landuse=residential polygons.

Boundary relations should normally include a place node, as follows:

Other types of boundaries

The admin_level=* values described above also apply to the following tags:

There is Proposed_features/Key:park:public_level which proposes to assign a value of admin_level appropriate to the administrative level of governmemt of a public park to "parks," as that word is meant in the USA (not necessarily as the strict definition in leisure=park). For example, a "county park" might be tagged park:public_level=6.