Wired network is the most reliable network access at the Congress. Please mind to bring a patchcable and, if your device lacks an RJ45 port, a suitable adapter.

We do not have a lot of photos due to the very restrictive photographing guidelines at the Congress. However, a few photos were taken when nearly nobody was present at the assembly. 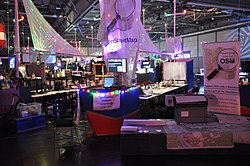 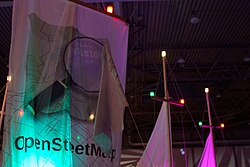 The OSM mapping workshop on day 3 had far more people interested in it than we could teach OSM because the workshop took place at the table of our assembly. Next year, we should use a dedicated workshop place where it is not that loud (i.e. the Open Infrastructure Orbit Workshop Dome) and more people can participate. --Nakaner (talk) 11:01, 31 December 2019 (UTC)

Or even use one of the dedicated self organized session rooms in CCL or Messehaus, at least some of them also have tables and a projector available, and it's certainly even more quiet. --Mstock (talk) 12:09, 3 January 2020 (UTC)

Depending on how many experienced mappers we are, we could also hold more than one workshop and announce them in the official Fahrplan. Maybe even specialise on different topics (that's probably going too far though) or hold them in different languages. --Mstock (talk) 12:09, 3 January 2020 (UTC)

maybe we can check before and coordinate with other OSM workshops/events Gislars (talk) 14:18, 5 January 2020 (UTC)

Be present on the OIO stage

We should submit one or two talks for the OIO stage. The general introduction part of a workshop can also happen there. --Nakaner (talk) 11:01, 31 December 2019 (UTC)

After giving about one third of our stickers to the Sticker Operation Centre at the morning of day 1, we had almost exactly the number of stickers we needed. --Nakaner (talk) 11:01, 31 December 2019 (UTC)

That people can print their own maps is a huge attraction IMO. I really would like to discuss ideas where we could get a printer. My idea is to find a sponsor (printer manufacturer?) to have a device long term (1-2 years?). We (as in OSM/FOSSGIS) would take care of the transportation and we would be able to print on more events. Hartmut is putting lots of efforts in his device and service, I really appreciate it. Let us brain storm about how we can enhance it. Gislars (talk) 14:18, 5 January 2020 (UTC)

Hartmut suggested already on the congress to buy a printer and a flightcase by Fossgis and pay the money back by the donations. Possibly Fossgis could buy a larger monitor or beamer as well. All this and other stuff i.e. stickers and flyers could be packed into a "tradefair"-flightcase and thus sent to every place where a Fossgis or OSM assembly/booth is placed. As we know this works for the sensitive video equipment of the Chaos Computer Club used at the Fossgis conference as well. -- Tirkon (talk) 08:16, 10 January 2020 (UTC)

Maybe bring a bigger screen and a current Raspi or similar for something like show-me-the-way (the laptop from this year was certainly fine, but having a bigger screen is nearly always better), and if we get a boat again, a VESA mount to screw it to the mast above the InfoBeamer screen. --Mstock (talk) 12:33, 3 January 2020 (UTC)

If we get a boat again, bring a beamer and some white paper or silver screen to put on the 'box' at the back of the boat and use this as a projection surface. This might be useful as a fallback in case we have to hold the workshop at our assembly again or at least during the practical part of the workshop if we hold it on some nearby stage. --Mstock (talk) 12:33, 3 January 2020 (UTC)

I agree. Our eyecatcher was tooooo small. More people like the year before visited our assembly. But this was still far away from the success two years ago. A large rectangular sail (instead of triangular one on the photo) attached between the two big masts of the ship could be a projection surface for the beamer that perfectly catches the angle of passing people's eyes. Watching the passing people nobody payed attention to thinks like "FOSSGIS" or "SOTM" on the screen. Of course we as insiders know what it is. But other people ...? The only real eyecatcher was "Show me the way", which was hacked and optimized by Mstock and thus ran smoothly for 24 hours ... until a person called "Simon Poole" was catched editing OSM. :-) -- Tirkon (talk) 07:46, 10 January 2020 (UTC)

I generally liked the location in the OIO and the ship, and having the cuboid next to the ship where we could setup the printer and put some large, printed maps was also very nice. We should also definitely put up the 'spinnaker sail' with the logo and the banner again the next time. Maybe we could also put some printed OSM logos on the provided sail, using eg. fixing pins (or look for an assembly with an embroidery machine and see if they can create something for us that we can put on the sail ;)) --Mstock (talk) 13:34, 5 January 2020 (UTC)

The waste bin at the front of the ship certainly has its uses, but is probably not ideal if one wants to put up stickers, flyers or similar stuff. --Mstock (talk) 13:34, 5 January 2020 (UTC)

The spot on the OpenStreetMap sail was good. Maybe another spot shining on the printer-cuboid could attract more people. -- Tirkon (talk) 07:46, 10 January 2020 (UTC)